Romain Grosjean's escape from his fiery crash in the Bahrain Grand Prix was the most public of displays about the safety advances Formula 1 has made.

That the Frenchman was able to climb out of his disintegrated Haas, which had plunged through the crash barriers and burst into flames, was rightly hailed by many as a miracle.

But while there was some good luck involved in the accident – especially with the way Grosjean stayed conscious and his car came to a rest the right way up – hard science and F1 safety protocols did play a huge part in him surviving.

F1 and the FIA's looming investigation in to what happened and the circumstances surrounding his escape will be deep and extensive, and the results may not be out for months as it pores over video footage, photographs and actual remaining physical evidence.

Haas, for example, has already said that it will leave the remains of Grosjean's survival cell untouched until the FIA has had a good chance to look at it.

Team boss Gunther Steiner said last night: "We just leave it there because we don't want to touch it at the moment anyway, because we need to go through and see what everybody wants to do.

"There is no hurry because nothing of that car can be used again anyway. If it stands like this, we clean it up and put it in boxes, it's the same thing. So for the moment it stays there and we'll start to build a car for next weekend."

But while bigger answers about what happened in the accident may take some time, photos of the crash and its aftermath already offer us some early indicators about the factors that came in to play to save Grosjean's life.

It is clear that the nose and the crash structure of the Haas disintegrated as it pierced the barriers.
As the car was winched away, you could see how the Side Impact Protection Spars (main image above) have been crushed under load – which is exactly what they are designed to do when reducing energy in a crash.

Considering Grosjean's 746kg car hit the barriers at 221km/h, with an estimated force of more than 50G, there was an awful lot of energy to get rid of. 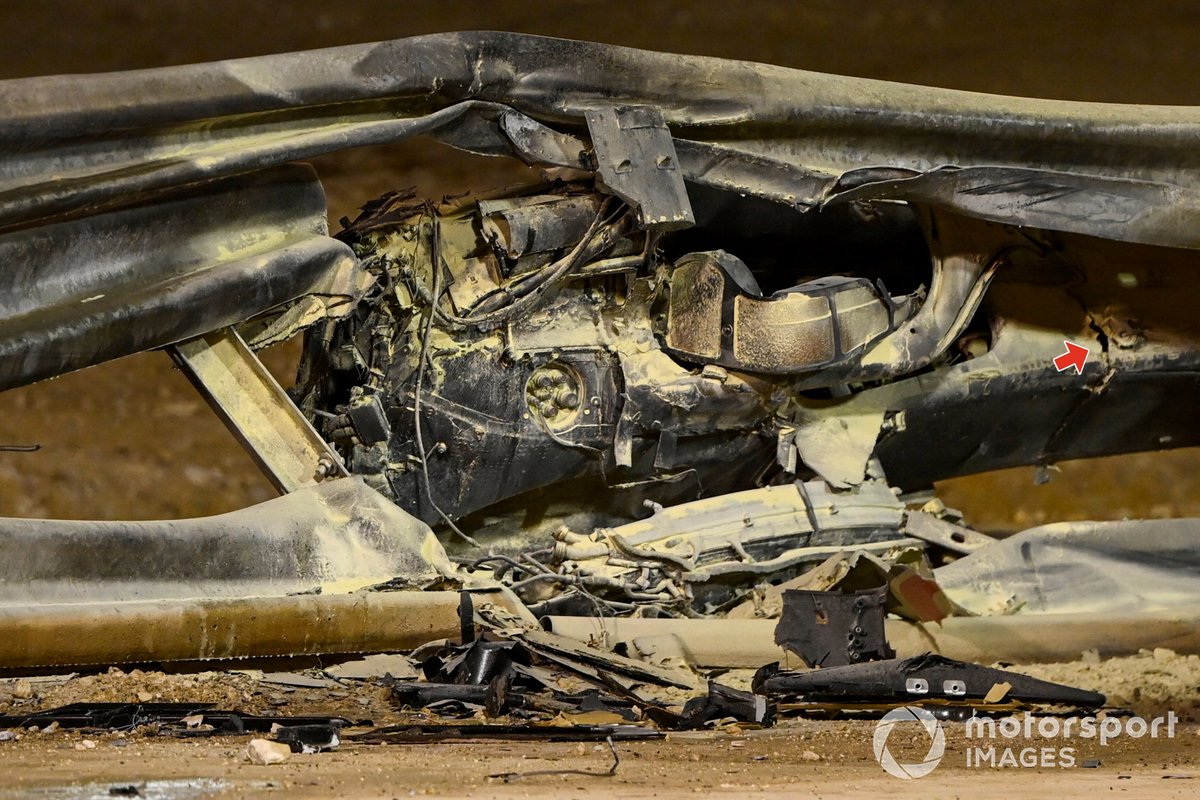 While barely recognisable, the survival cell remained pretty much intact despite the impact. But note (red arrow above) how the chassis did appear to open up ahead of the Halo.

As the chassis slid through the barrier, it appears that the Halo peeled open the gap in the guardrails – and in doing so helped protect Grosjean's head from the metalwork.

Damage to the roll hoop indicates that this may have been the stopping point against the barriers. In the above image we can see that the roll hoop remains on the track side of the barrier under the camera pod. This is likely what caused the inverted V-shape in the barrier just to the left.

Once the car was removed from its resting place, the damage to the roll hoop is more visible and clearly shows the tremendous forces this part of the car received. The front spar of the roll hoop has been punctured, but it remained intact. 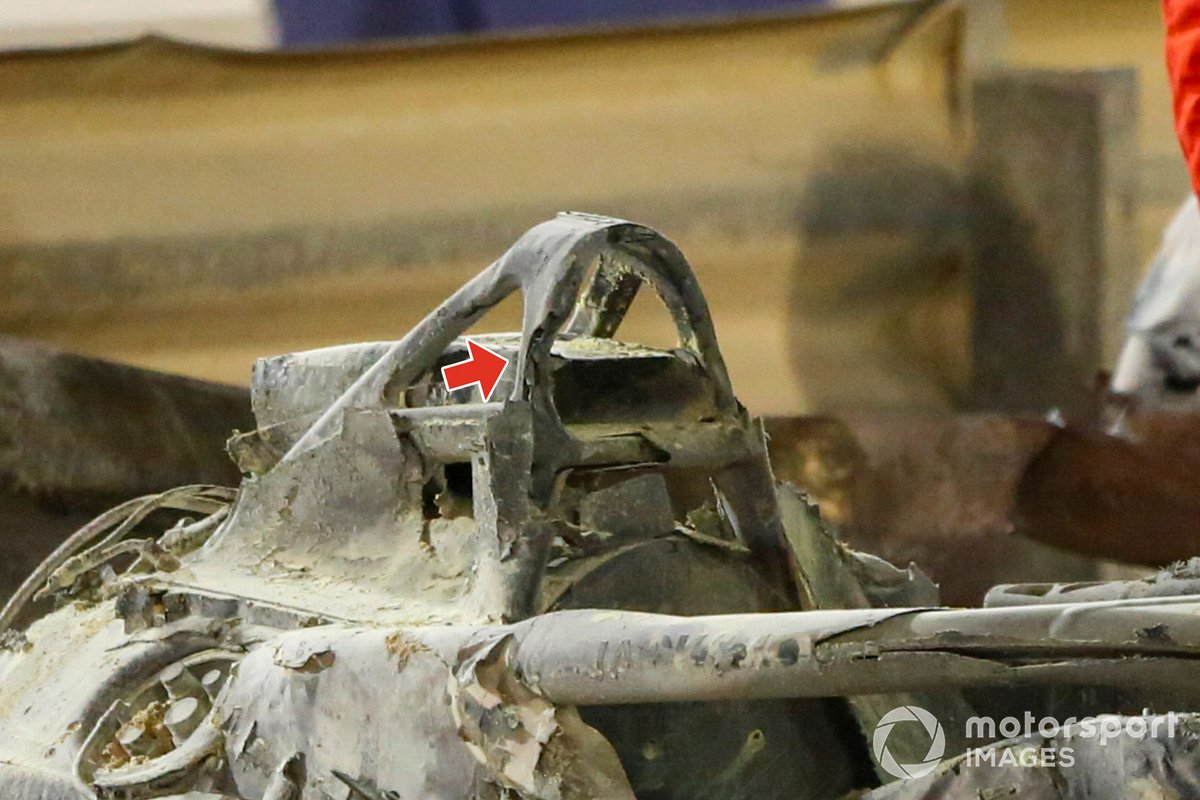 Once out of the barriers, the state of the survival cell was also made much clearer, with the damage indicated by red arrows here (see below). The opening at the front of the bulkhead became exposed by the vanity panel no longer being on the upper section of the chassis. 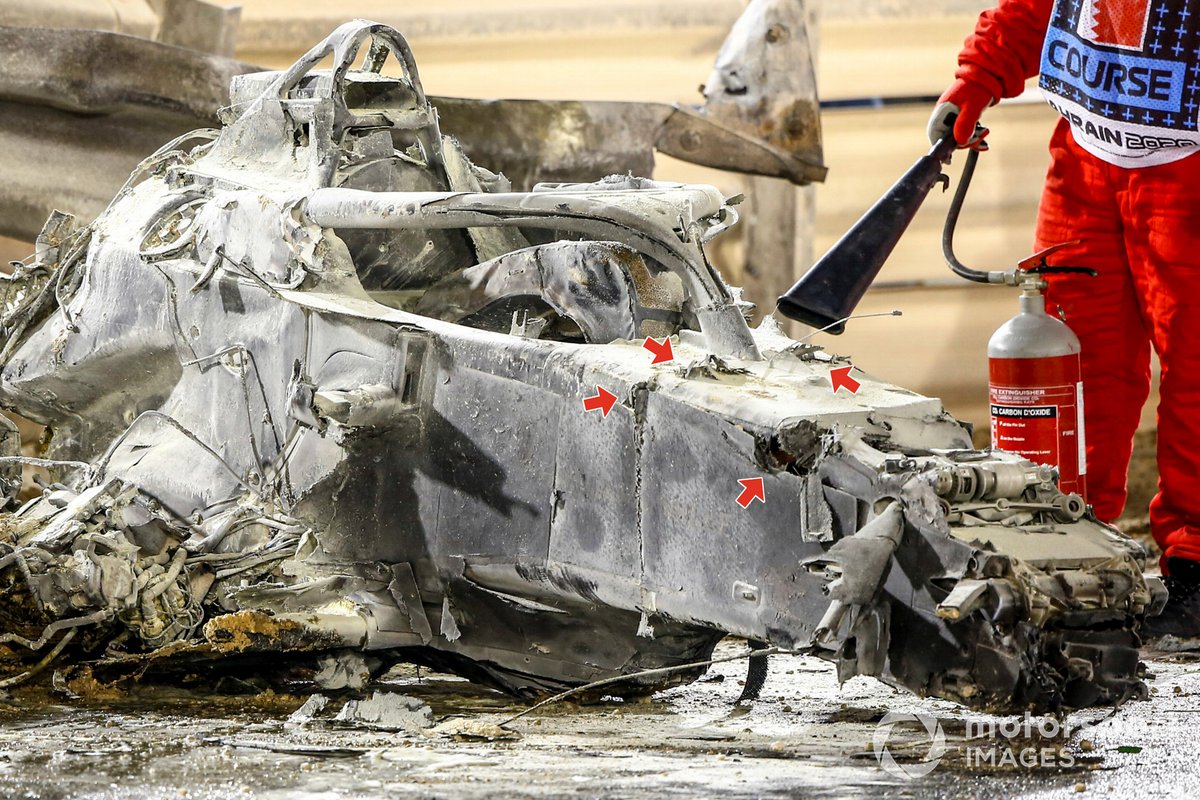 Considering the exposure that the Halo had with the barrier, it has remained relatively unscathed – but its damage does show that level of force it carried with it. The Halo fairing has also been destroyed, but this is only a laminate panel so that's to be expected. 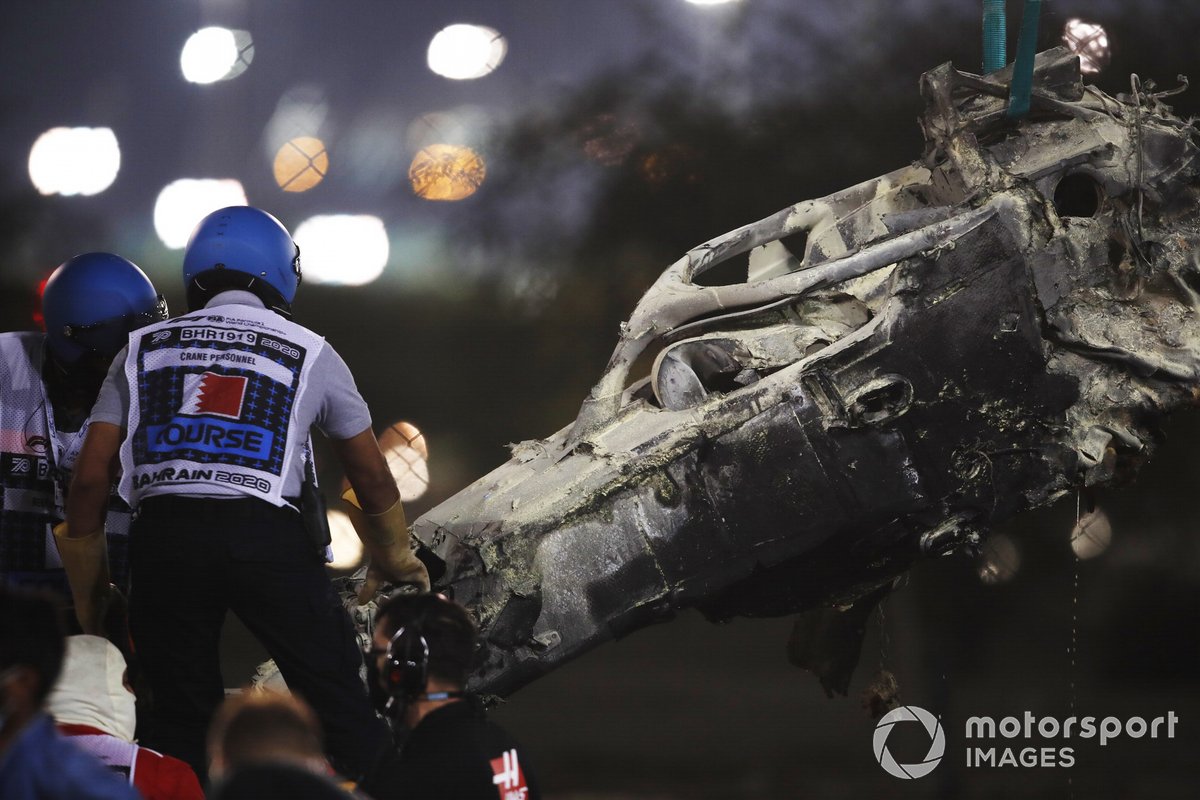 Marshals remove the wreckage after a huge crash for Romain Grosjean, Haas VF-20, on the opening lap

One of the more dramatic aspects of the accident is the way that the car instantly split in two, with the survival cell plunging through the barriers and the engine segment coming to a halt on the track side. 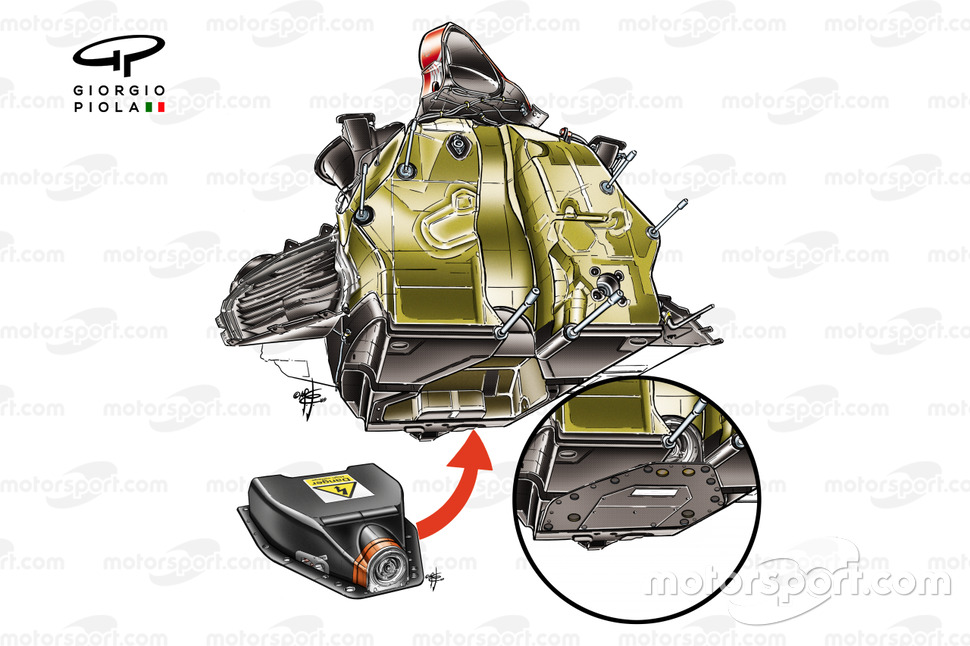 There are six bolts that hold on the power unit and effectively the entire rear end of the car to the survival cell. The indications are that these bolts sheared off due to the tremendous forces at play, and the hefty engine segment came to a halt further up the track. 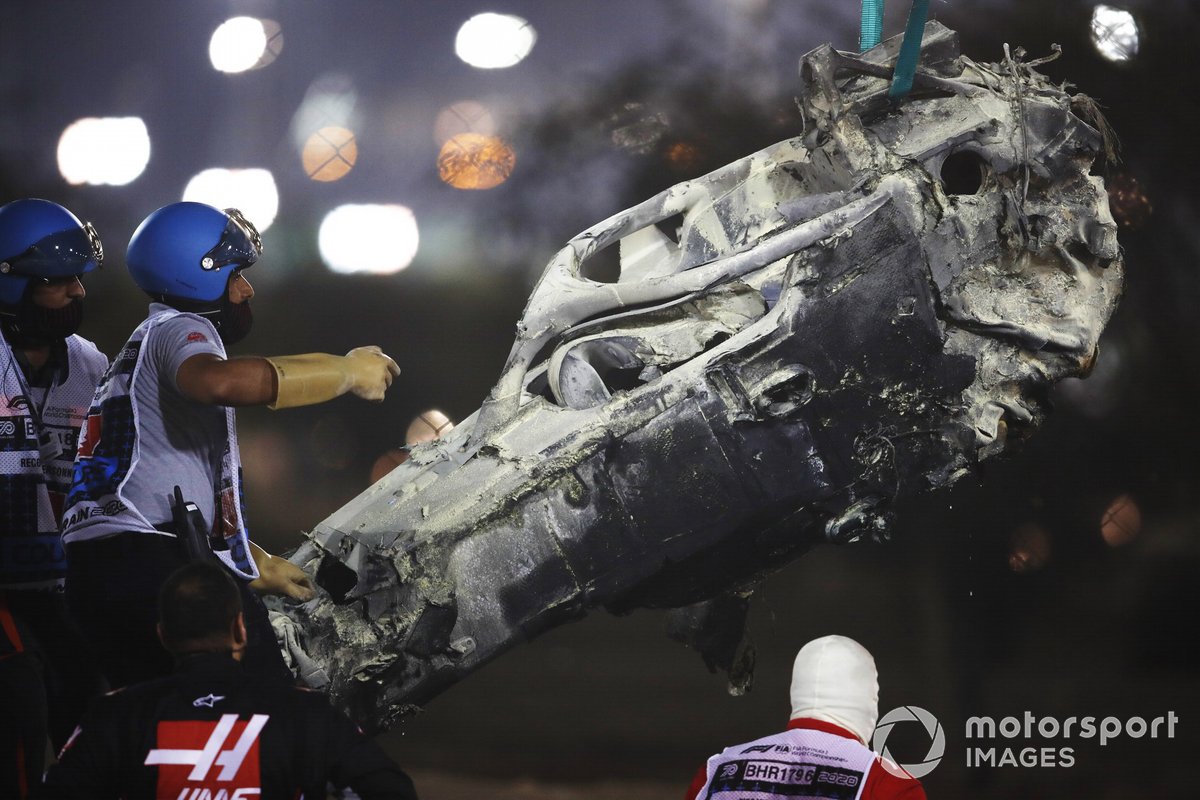 Marshals remove the wreckage after a huge crash for Romain Grosjean, Haas VF-20, on the opening lap

The blaze was most likely caused by either the fuel tank itself being ruptured or fuel lines being ripped apart in the impact. The images appear to show the push-on connectors having been pulled straight out of the tank.

And even if all the fuel in the car did not erupt in the blaze, it looks (above) like the fuel bag is both empty and crushed in this image when marshals are putting the car on the recovery truck. A hatch panel is also missing.

Grosjean excited to share data with new teammates and Castroneves