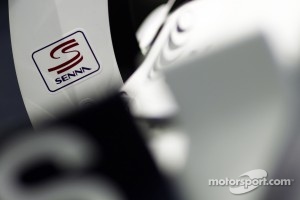 Ever since that fateful day at Imola in 1994, Williams' small and silent tribute to the great Brazilian has been visible to eagle-eyed spectators.

"We've dropped that (now)," Williams, now 70 but still the team principal, told the Guardian. "It's time. And, also, we've now got Bruno."

He is referring to Bruno Senna, the great Senna's nephew who now races a Renault-powered Williams.

Senna, 28, is commonly written off as a pale comparison to his famous uncle, riding on the back of sponsors and his surname.

But Williams insists they are not the reasons Senna got the drive.

"Bruno was just a good candidate and a very intelligent person. There were no negatives -- just some good, positive reasons to say 'Yes, let's give him a go'."

But it is Senna's fabled uncle that Williams names as his favourite Williams driver.

"I was very emotional about it (his death) because it was one of our cars and he was such a special person. He was immensely charming, but also tough, ruthless and brilliantly gifted," he said.

Sir Frank has stepped down as chairman and even as an active board member of his team, but he is still the 'team principal' and has taken back some of the tasks completed previously by the recently-departed Adam Parr.

"I'm at work every day of the week because there is a lot to do and I love F1," he said. "I'm just not ready to make a dramatic change in my life -- like staying at home."