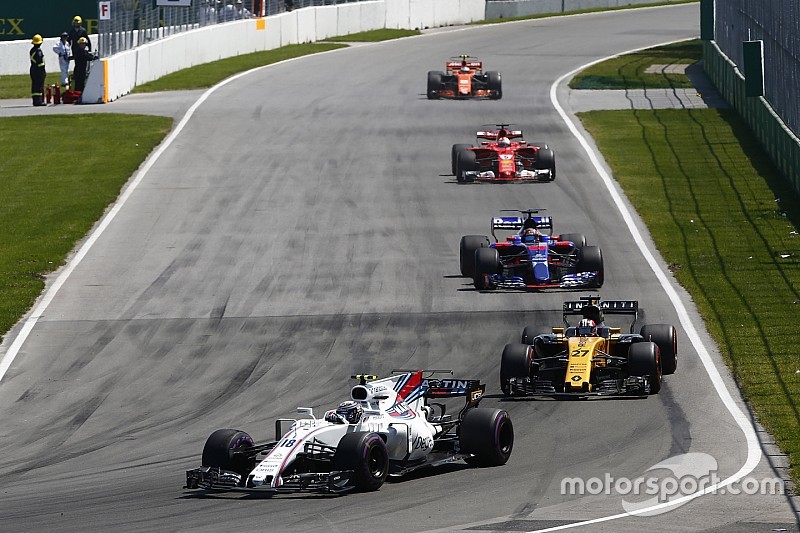 The teenager had failed to score any points in the first six races, and has struggled to match teammate Felipe Massa in qualifying.

However, Williams believes Stroll's feisty performance in Montreal, in which the Canadian battled several established names, has gone some way to answering the critics.

“I think it was real vindication for him today, wasn’t it?,” Williams told Motorsport.com. “He proved all those doubters wrong, and he truly deserves his place. He came from 17th from ninth, and he did it twice.

“I’m really proud that he’s done what he’s done today. It takes the pressure off everybody, which is really good.

"I think it’s a monkey off his back, and it’s only taken him seven races to do it. And what better place than Montreal?”

Williams believes that Stroll has been able to soak up the pressure and use it to his advantage in Canada.

“I think he’s been under a huge amount of pressure, and that pressure comes from himself. He’s one of those drivers for whom that’s a good thing, it drives him forward and I think he’s dealt with it really well.

“Considering he’s only 18, and we should all remember that, the fact that he keeps coming back shows his bounce back quality is pretty impressive, considering the negative commentary that’s been going on on top of everything.”

The bad news for the team in Canada was that Felipe Massa was eliminated after being hit by Carlos Sainz on the first lap, while main rivals Force India took home a huge haul of points.

“Who knows where Felipe could have ended up today? It’s a real shame, what happened with Carlos. He could have maybe even got on the podium again. More points lost, that we didn’t need.

“It was great to see the Force Indias up there fighting with the Red Bulls and Ferraris. Good for them, they deserve it, they’ve worked really hard. The gap between us is now enormous, but that’s our fault, not theirs.”

Lowe: Hamilton as fast as Senna, but not as ruthless

Bottas says he had Hamilton's pace in Canada