Work of a race engineer with Ferrari's Dyer

It would seem that the days of an F1 driver's race engineer being confessor, drinking pal and best mate as well as making his car go quickly are long gone. "You are so busy at the races, going testing, travelling, analyzing data having meetings at ...

It would seem that the days of an F1 driver's race engineer being confessor, drinking pal and best mate as well as making his car go quickly are long gone. "You are so busy at the races, going testing, travelling, analyzing data having meetings at the factory plus trying to find a little time for a personal life with the family there is no time left over for socializing with the drivers any more," points out Chris Dyer, the 35-year-old Australian who, this year, became the most recent race engineer to World Champion Michael Schumacher. 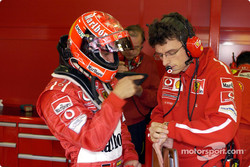 Michael Schumacher and Chris Dyer.
Photo by Ferrari Media Center.
"In fact, with all the testing and the race meetings we probably spend more time together during the summer months than we do with our respective wives," he points out with a smile.

After learning his trade with the successful Holden touring car team in Australia and then with the Arrows Formula One team in England. The job remains basically the same as it was with drivers like Jos Verstappen, Damon Hill and Tora Takagi at Arrows, "But the main difference is that there are three or four people now to do what I had to do alone at Arrows!

One of the key ingredients to Ferrari's success in recent years has been the meticulously orchestrated teamwork amongst the different working groups overseeing the various aspects of the car. "As race engineer, I am more the coordinator of information coming from a big team of people who all have a valid input towards improving the car's performance during the race meetings or testing. We discuss between us which direction to take and I don't ever remember anyone having to force his opinion on anyone else," says Chris.

The transition from the Arrows team to Ferrari was not as hard as one might have thought. "In fact, it was easy. I joined an already well-oiled machine that had been built up and proven over the years before I arrived. For sure this year is certainly the toughest we have had for several seasons, but if we take the Championship at the end of it, it will make it all the sweeter," he points out with smile, obviously enjoying the challenge.

"When the going gets tough there are definitely no panic decisions, we simply focus on what has made us successful in the past, not lose sight of the goals and keep the faith that we are doing the right thing to continue that success," he explains.

Working with a driver like Michael Schumacher is what Chris describes as "A bit of a double edged sword." He explains why. "Working with Michael is easy. He is above all a nice guy and is always calm and level headed. He has a lot of experience and can remember any little problems that may have arisen at different circuits over the years. A sort of built-in data bank that he can draw upon and he knows the car's different systems so well that he can help analyze and solve any problems that might crop up during the weekends," he explains.

"In other ways, it can be a lot tougher because there is always the pressure to perform, especially when we are having a lot more competition like this year," he adds.

The weather can also make life difficult for an engineer, as it did in Magny Cours when it rained on Friday. "We had the usual tyre evaluation and basic set-up to do for Friday, plus the extra work of carefully monitoring the brake wear for the new corners and other aspects of the car. When you get rain as we did in Magny Cours, you then have to try and do all that on Saturday which with the reduced running time this year means that there is no time to explore other possibilities on set-up," explains Dyer. "In the difficult circumstances of reduced track time and bad weather during practice, Michael's experience is a big help, while we also have the data from previous races to help us get the best set-up for the race," he says.

At next weekend's British GP, the problem of reduced testing is not so critical. "It is one of the tracks that we can test at before the race, so we have all the information from the test a few weeks ago. We have a pretty good idea of the set-up before we arrive and we can use the free practice time to confirm tyre information and fine tune the set-up," explains Dyer.

After four-and-a-half years in England, Dyer is enjoying the weather much more since moving to Italy two-and-a-half years ago. It is a long way physically and spiritually from the rural country town of Victoria's Bendigo, Australia, to Ferrari's home base of Maranello, Italy; a move that Chris once dreamed of and is now living full time. Any disappointments? "Not at all. I enjoy every minute of it," he says with a wide smile. Working with a driver like Michael Schumacher for a team like Ferrari, who wouldn't?

Silverstone a wake-up call for Williams

Coulthard's thoughts on the British GP

Sainz: US GP contact with Ricciardo "on the limit of legality"

Fernando Alonso and Kimi Raikkonen's clash in Austin has thrust the debate about rights and wrongs of wheel-to-wheel combat firmly into the public spotlight, prompting complaints about the Formula 1 rules process. But what can the FIA do to prevent the issue resurfacing?