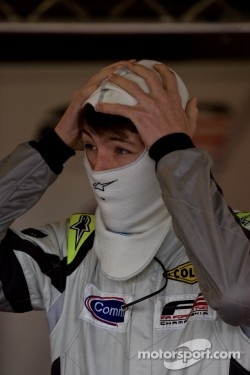 The 19-year-old posted a best time of 1:47.676s - quicker than Mirko Bortolotti's pole time from last year - late in the session to secure the top spot from fellow countryman Mathéo Tuscher with Markus Pommer, racing on home soil this weekend, going third.

Brit Luciano Bacheta, still unbeaten in the series after a record-breaking four consecutive wins, secured fourth place for the 45-minute session with Kevin Mirocha rounding out the top five.

The sun shone as the drives took to the 5.148km track with Bacheta laying down the early benchmark, lapping in the low 1:48s closely followed by Fontana and Christopher Zanella. David Zhu, who enjoyed a best of fifth last time out in Portimáo, was also looking strong in P5 after 15 minutes before many of the field headed to the pits.

Pommer then went top with 20 minutes left on the clock with the German the first driver to break into the 1:47s. Mirocha had also improved to lay third behind Bacheta, while further down the order debutant Axcil Jefferies was making good progress just outside the top 10.

With five minutes remaining, Alex Fontana then went top to edge out Pommer and Bacheta, with Tuscher moving up into fourth with Parthiva Sureshwaren and Plamen Kralev both showing good pace in sixth and ninth places respectively.

In the closing stages, Tuscher went even quicker to go P2 - a mere 0.163s behind Fontana, with Pommer hanging onto third. Sureshwaren held onto his P6, one of the Indian driver's best performances, with 2011 F2 runner-up Zanella in seventh and Mihai Marinescu in eighth. Kralev also kept his P9 with Zhu completing the top 10.