Swiss secures first win of season ahead of Marinescu and Tuscher

Christopher Zanella secured his first win of the 2012 Formula Two season by taking the honours during today's (Sunday) second race at the Nűrburgring.

The 22-year-old led from pole but was past early on by fellow front-row starter and yesterday's race winner Mihai Marinescu. The Swiss bided his time though behind the Romanian, shadowing him until five laps to go before making an identical move to that used on him, driving around the outside of Turn 1 to bring it home until the chequered flag. Mathéo Tuscher secured third with a relatively untroubled drive, his third F2 podium in four races, with German Markus Pommer collecting viable points on home soil in fourth.

Zanella made a good start as the lights went out followed closely by Marinescu, Tuscher and Pommer, while just behind Alex Fontana had been able to get ahead of championship leader Luciano Bacheta. In the midfield, Zamparelli had also made two places from his P10 grid slot while at the front Marinescu made a late-braking move at Turn 1 on lap three, going around the outside of Zanella and just taking the place on the inside of Turns 2 and 3. 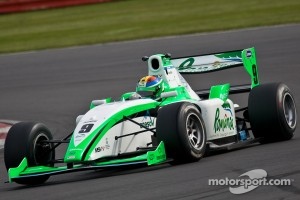 Marinescu then set about building his lead - much like he did yesterday - but Zanella was able to keep him in his sights with the gap remaining under one second. Zamparelli, meanwhile, was continuing his charge through the field, getting past McKenzie for seventh to leave a trio of Brits.

As the leading pair began to pull away from Tuscher, Zanella was now beginning to close the gap further, lying within the Boost Zones but waiting patiently before making his move. That came in the closing stages with Zanella producing a carbon copy of Marinescu's earlier move before building a three second lead to secure his third F2 victory and his first in more than a year. He was presented his wining trophy by German race driver and special gust Sabine Schmitz (pictured).

Fontana's drive to fifth remained untroubled while sixth place Bacheta had a fairly low-key race by his standards and coming under pressure from Zamparelli towards the end, including an unsuccessful lunge at Turn 1 on the final lap. Daniel McKenzie fought off pressure from David Zhu for eighth place leaving Kevin Mirocha to finish 10th.

Earlier, the start of the race was delayed after Axcil Jefferies' car caught fire on the warm-up lap causing him to miss the race.

Speaking afterwards Zanella said: "I had a good start and ran well on the first few laps but then with the boost Mihai was able to overtake me. Then I decided to wait a bit and then at the end I took my chance and made a good move around the outside of Turn 1. I just kept pushing after that!"

The next rounds of the 2012 FIA Formula Two Championship take place on 22-24 June at Spa.