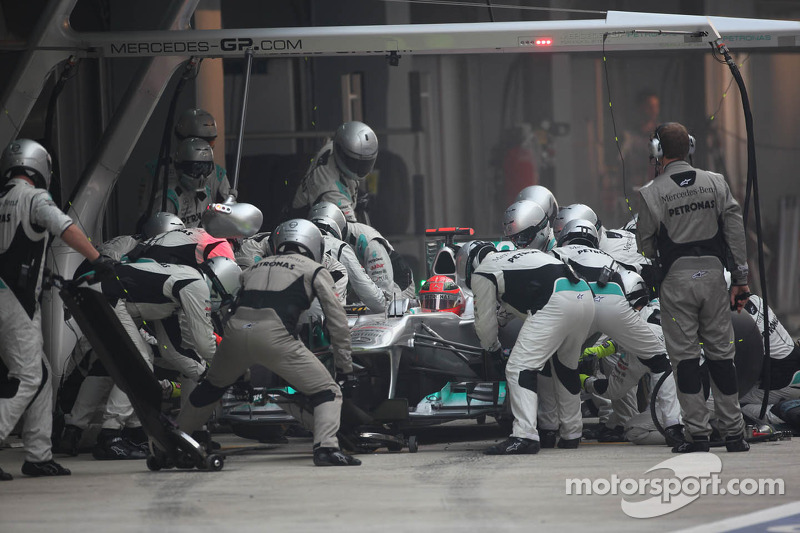 Strong drives from MERCEDES GP PETRONAS pair Michael Schumacher and Nico Rosberg saw them finish in fifth and sixth places respectively in today's inaugural Indian Grand Prix at the Buddh International Circuit.
• Michael made up four places at the start, and followed a prime/prime/option strategy, stopping on laps 18 and 50
• Nico also stopped twice on laps 17 and 45 with the same prime/prime/option tyre choice
• Staying out five laps longer for his second stop enabled Michael to open enough of a gap to pass Nico for P5 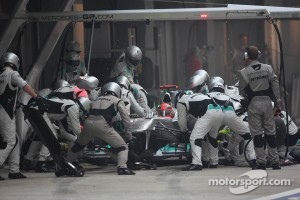 "I am obviously happy about the race today. We achieved the maximum that we could hope for, and as a team we maximised our potential. Fifth and sixth places are a great result for us. On top of that, my car was very nicely sorted for the race and very stable. At the start, everything worked out according to my strategy as I deliberately didn't want to use KERS in the first two corners and save it for the long straight where I knew that I could make up some positions.

In the second stint, I managed to maintain my tyres so I could stay out longer and that was enough for fifth place. What's really important at the moment is that we keep pushing and trying to improve, and that is what we achieved today. To the organisers of the first Indian Grand Prix, I would like to send a big compliment; I'm sure that I am not the only one to say that this was a very positive debut." 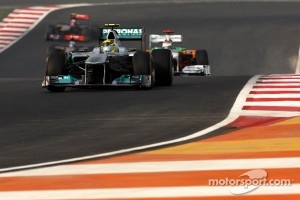 "We can be happy with a good team result and that's what the boys in the garage deserved. I'm also pleased to have gained one place on my grid position. However my strategy was not perfect today and I lost some time in the second pit stop which meant that I wasn't able stay ahead of Michael. I had good pace at the end of the race and pushed very hard but it was impossible to catch him over the last laps. I'm confident that we can repeat this good result in the last two races. All in all, it has been a good Indian Grand Prix debut for us and I hope all the fans enjoyed the race. I'm looking forward to coming back next year."

"A very solid race from the drivers and team today, and we are very pleased to have achieved fifth and sixth places. Michael, Nico and the engineers did an excellent job to focus on getting the car right for the race, and making the best use of the tyres. We certainly got everything that we could out of our current car this weekend. It was an exciting race from our two drivers with Michael coming out on top this time, however you could see just how closely matched they are during the race. Nico's second set of tyres faded a little bit more on him whilst Michael was able to stay out longer which was enough to take fifth place. It was a very good result for the team today and I'm extremely pleased with how we have worked this weekend."

"A strong result today for our team considering the possibilities that our technical package currently has. It is satisfying for everybody to extract the maximum and to achieve the best possible result. Our lap times looked consistent throughout the race which shows that we handled the tyres well and found a set-up which suited the track. Of course, our drivers did a very good job today. To come home in fifth place after starting in 11th is certainly satisfying for Michael. His start, when he gained three places, and his second long and consistent stint were decisive for him to get in front of Nico.

He also did a good job today with both our drivers doing similar lap times throughout the race which shows that they achieved what was possible. This inaugural Indian Grand Prix was a remarkable event. This is a fantastic and challenging race track, and saw packed grandstands and great enthusiasm from the fans. Formula One could not have wished for more during the first race in a new country. So a big thank you to the organisers, the Jaypee Group, and to Bernie Ecclestone and FOM, who have worked very hard to make this new event happen. We now are looking forward to the next Grand Prix in Abu Dhabi, the home of our co-owners and partners aabar, where we hopefully can achieve a similar result.

Fifth and sixth paces are not what we are ultimately striving for but it is satisfying to get the best possible results and we can build on that in order to make a good step next year."