On home soil the 21-year-old pressured pole-sitter Mihai Marinescu throughout before making his move on the penultimate lap to take the chequered flag for a clean sweep of the honours and an early championship lead. Marinescu finished second with Alex Fontana completing an impressive maiden F2 weekend with another visit to the podium in third.

As the drivers lined up on a bitterly cold Silverstone circuit, light rain began to fall ahead of the formation lap with the threat of further rain looming. As the lights went out it was the Romanian who made the best start to lead with Bacheta slipping into second and Fontana in third. Just behind Daniel McKenzie lost out to Kevin Mirocha to be lying in fifth, while a lap later Mathéo Tuscher got the better of Dino Zamparelli around the outside of Brooklands for sixth spot. Zamparelli then had his mirrors full of Christopher Zanella while up front the leading pair of Marinescu and Bacheta began to pull away from third placed Fontana. 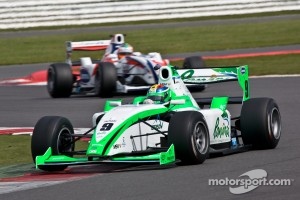 A mistake by Mirocha through the last few sections on lap seven allowed McKenzie to get by along with Tuscher with the Pole losing yet more ground, first to Zamparelli through The Loop, and then Pommer at Luffield. The midfield battled continued to rage this time Pommer going side-by-side with Zanella and squeezing past at Luffield on lap 13 for P7.

Up front the leading duo were now six seconds clear of the rest of the field as Bacheta started to close in on Marinescu, waiting for the best time to make his move and take advantage of the series' new Boost Zones.

On lap 20, the Brit saw his chance and took the 23-year-old going into Brooklands to take the lead and keep enough of a margin to avoid being retook a lap later. Marinescu, who didn't put a foot wrong throughout the race, claimed second with Fontana, who endured a relatively isolated race, in third.

McKenzie hung on to finish fourth ahead of a charging Tuscher who has impressed on his F2 debut, while fellow newcomer Zamparelli came home in sixth. Pommer and Zanella finished seventh and eighth respectively with China's David Zhu and Hector Hurst completing the top 10.

Speaking afterwards an elated Bacheta said: "The experience from yesterday definitely helped. I was just biding my time. I pushed a lot harder in the beginning than I wanted to just to stay in a second of Mihai all the time. He was so quick. He didn't put a tyre wrong. And it was tough to keep up. I kept chipping away then the gap levelled. I was saving the boost for the final stages but in the end I didn't have to use it. I used it on the last but one lap at Brooklands. Mihai was looking in the mirror knowing I had the boost. We still need to work a little bit on our qualifying pace but I'm happy with our race pace and I couldn't have asked for a better two results!"

The next rounds of the 2012 FIA Formula Two Championship take place on 27-29 April in Portugal with full coverage, including live streaming, on the F2 website and also live on Motors TV. 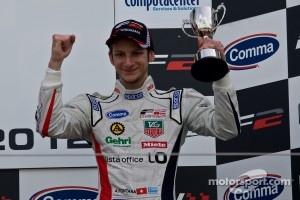 F2 Championship Standings – After round two: