Starting from P3, Zanella had stormed into the lead on lap one getting past both Bacheta and pole pole-sitter Mathéo Tuscher, who ran wide at Becketts and then Brooklands to drop down the order. The Swiss racer, using fresh rubber having carried over a set from pre-season testing, than began to pull away and looked to be on course for his third F2 win.

Marinescu, now in second place, then began to catch the 22-year-old and by lap eight was less than one second behind and putting the Romanian in the new overboost zone.

Third place Bacheta was also now closing in on the leading pair making a three-way battle for the lead, separated by just 1.5s. As the race progressed Bacheta continued to close in on Marinescu, taking some pressure off Zanella, and was able to get passed the Romanian with a great move going into Brooklands for second place. 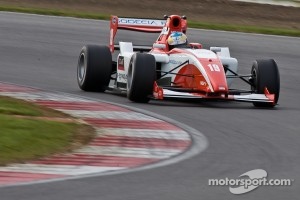 The 21-year-old then set about closing in on Zanella and had narrowed the gap to 0.237s with just a few laps remaining, carrying better speed through the slower corners and taking a tighter line through Luffield. He then made his move along the Wellington straight and on the inside going into Luffield to take the lead. Despite Zanella having one overboost left, he was unable to re-pass him handing Bacheta a superb maiden F2 win.

There was more drama to come as fourth place Alex Fontana, who had been closing in on Marinescu all race, then made a move into Woodcote in the dying stages of the race going side-by-side to steal third place and the final podium spot on his F2 debut.

Just behind, Daniel McKenzie impressed to finish fifth after making up two places with Tuscher recovering to finish sixth and Hector Hurst in seventh. Pommer, who was forced to start from the back of the field after spinning in qualifying, drove remarkably through the field to claim a deserved eighth spot ahead of Dino Zamparelli, who was suffering electrical issues in the latter stages with Kourosh Khani rounding out the top 10.

I would have been happy with third in the first race of the year, but I saw myself starting to catch the guys in front...

Speaking afterwards a delighted Bacheta said: "My heart sank when I had that start, because I dropped down to fourth by the first corner which I wasn't very happy with. I stayed out of trouble and started to get into the rhythm of the race, as we were stepping into the unknown in the first race of the year without many long runs in practice. I knew it would be easier to overtake when the tyres were falling away towards the end. I would have been happy with third in the first race of the year, but I saw myself starting to catch the guys in front, so just waited and tried to force them into a mistake."