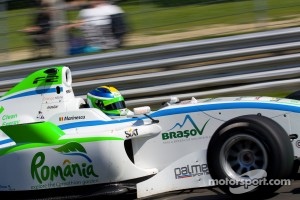 Mihai Marinescu made the perfect start to his 2012 FIA Formula Two season by toping the timesheets during today's (Friday) opening free practice session at Silverstone.

The 23-year-old, who finished fifth last year after collecting his maiden win, went quickest early on and was untroubled throughout the 45-minute session, ending with a best time of 1:47.631s - a full two seconds quicker than the pole time from this time last year (Miki Monras, 1:49.934s).

The 17-strong field were greeted with sunny but cold conditions as the first session of the 2012 F2 season got underway using the upgraded F2 car featuring new Yokohama tyres and carbon brakes.

2011 runner-up Christopher Zanella laid down the early benchmark by lapping in the mid 1:48s and closing in on Pommer's leading time from pre-season testing.

Fellow returnee Marinescu then went top, a full three tenths quicker than the Swiss, with Fontana third and Pommer fourth with 15 minutes gone. The session was then briefly halted after British driver and BRDC Rising Star Dino Zamparelli spun at Club before resuming with 20 minutes left on the clock.

Kourosh Khani, Daniel McKenzie and Mathéo Tuscher were all looking strong on their debut as was former Formula Renault BARC racer Hector Hurst in P5. Swiss driver Fontana then went P2 just behind Marinescu with Comma-backed Luciano Bacheta in third as Zanella dropped to P4.

Marinescu then went even quicker and became the first driver to dip into the 1:47s, closely followed by Fontana and Pommer, but neither were able to better his time. McLaren Autosport Award finalist Zamparelli recovered to finish the session an impressive fourth with Bacheta completing the top five.

Zanella finished sixth with Hurst seventh and Iranian driver Khani in eighth ahead of McKeznie and Tuscher.

Today's second free practice session gets under way at 14:40 (local time) with full coverage on the official F2 website.