Jonathan Palmer: "Other championships at F2’s level have also increased their appeal through recent performance upgrades."

MotorSport Vision (MSV), the operators of the FIA Formula 2 Championship, have agreed with the Federation Internationale de l'Automobile (FIA) not to continue to run the series in 2013 for what would have been the fifth and final year of its contract with the FIA. 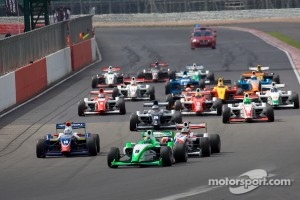 Start of race at Silverstone

MSV Chief Executive Jonathan Palmer explained the reasons: “Despite launching the FIA Formula 2 Championship in 2009 at the start of this major global recession it has performed well with good grids and very competitive racing over the past four years.

“As the FIA intended, F2 has always provided outstanding value and equality for its competitors. However, it has become progressively clear that the single operating team concept that enables these benefits has compromises that have, overall, reduced its appeal to drivers. We and the FIA are in agreement that any future F2 should operate on a more conventional, multi team basis.

“Other championships at F2’s level have also increased their appeal through recent performance upgrades, and it is logical to conclude that in F2’s final year grid numbers would reduce, perhaps significantly. I believe we have a responsibility to competitors planning their 2013 seasons and careers not to operate F2 if we are not confident of another strong season, and have therefore discussed this matter with the FIA who understand and accept our recommendation not to continue.

“MSV has a long history of major investment in junior single seater series and commitment to providing affordable racing for aspiring F1 drivers. Whilst we are disappointed that the current format of the FIA Formula 2 Championship has not been a total success we are proud of its many achievements and remain absolutely committed to innovation and investment in the business of motorsport, in particular series for young drivers.

“We have learnt a great deal over the past four years and our experiences have made MSV stronger and more capable, as we continue our discussions with the FIA regarding the long term future of the FIA Formula 2 Championship.”

The FIA commented: “The Federation has been pleased to support F2 throughout these four competitive years. This is a racing series which has introduced many young drivers to motor racing and prepared them for higher challenges. The FIA is determined to develop a clear path for young drivers from karting to F1 and therefore reiterates our commitment to single seater racing series.”

The operators of the Hockenheim circuit are surprised that German venue has not been included on the calendars of the Formula 2 and GP3 championships for 2018.

Former Ferrari Formula 1 team principal Stefano Domenicali has pledged that he will have a plan for the FIA’s new Formula 2 project “very soon”.

Legendary Italian marque Alfa Romeo has been tipped as a potential supplier for the FIA's planned new F2 category, according to sources in Italy.