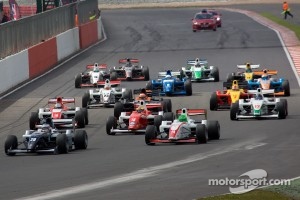 Last weekend’s opening rounds of the 2012 FIA Formula Two Championship at Silverstone saw the introduction of an innovative new overboost system, leading to some of the series’ closest racing.

The new 'F1-style' system shares similarities with the DRS feature used in Formula One. Each driver has up to eight shots of overboost available to them – increasing power output of the F2 car from 425bhp to 500bhp for a period of six seconds – but can only use them if they're within one second of the car ahead.

Two activation zones, named Boost Zones (BZ), were introduced around the 5.901km track with the first being the run into Stowe corner and the second through the Wellington Straight into Brooklands. The system becomes active after the first lap and lasts until the final lap of the race with a maximum of two boosts per lap.

British driver Luciano Bacheta took full advantage of the new system as he secured a superb double win – both times overtaking the leader in the closing stages of the race. Just 0.912s separated him and second-place Christopher Zanella at the finish in the opening round – one of the smallest margins in the championship’s history. Alex Fontana was another driver who put it to good use, with the Swiss passing Mihai Marinescu in race one through Woodcote in the dying seconds to secure his maiden podium.

The system was one of several new features introduced for the 2012 F2 season including new Yokohama tyres and carbon brakes. The improvements saw the cars lap around two seconds faster than the 2011 machine.

Drivers were quick to hail the new system following the weekend. Double race-winner Bacheta said: “I really liked it. The previous system meant drivers could cover up mistakes but that’s no longer the case. You have to very clever how and when you use it as once you get past someone you need to have the pace to stop them re-taking you.”

Fontana, the reigning European Open F3 champion, added: "I like it and how it makes the series closer to F1. Before, you could defend by also boosting when someone tried to boost past, you which you can't do now. I also like how it's limited to eight shots so you have to think carefully about when to use them and to work it with the state of your tyres."

F2 newcomer Daniel McKenzie, who finished fifth and fourth respectively over the weekend and raced in Formula Renault 3.5 last year, said: "It's a cracking system and possibly the best feature I've experienced in all previous single seaters. It doesn't make overtaking easier as you still need to get close to the car in front and also still time your move. It also makes overtaking safer as it stops drivers making lunges."

The next rounds of the 2012 FIA Formula Two Championship take place on 27-29 April in Portugal with full coverage, including live streaming, on the F2 website and also live on Motors TV.

Kirchhöfer quickest on day one in Valencia