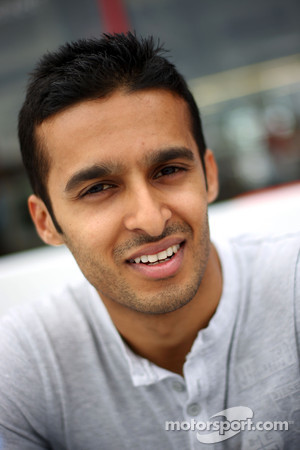 The Chennai-born racer joined F2 for 2010, and after a solid start at Silverstone and Marrakech he scored his best result of the year at Monza, finishing 10th in race two to earn his maiden points finish. He went on to challenge for the points on several other occasions, notably finishing 12th at Zolder and 11th at Portimco.

Prior to competing in F2, Parthiva forged a reputation as one of India's leading talents after success in a variety of national championships earned him a call to represent his country in the A1GP World Cup of Motorsport.

Despite his wealth of experience, Parthiva's return to F2 represents the first ever time he has competed in one series for two consecutive seasons -- and he hopes his previous experience will help him promote his talents in his home country, particularly with the excitement generated by the arrival of India's first Formula One Grand Prix this year.

"I'm majorly motivated and feeling very confident," Parthiva declared. "This is the first time in my career that I will be returning to a championship in consecutive years, so I know what to expect and that is a major advantage.

"As a driver you need to be in the right place at the right time, and with more awareness and money coming into Indian motorsport now due to the Grand Prix, it's an important time to gain recognition. F2 is definitely the right platform not just for me but for any driver looking for that recognition.

"Importantly, it's also a great championship -- it's run very well, cost-effective and the cars are very good, so there are a lot of positives. There are some great circuits this year which I'm really looking forward to, and while I'm keeping my aims inside me for now I learned a lot last year and I'll be looking to make the most of that in 2011!"

Jonathan Palmer, Formula Two Chief Executive, said: "The popularity of motorsport in India is growing rapidly, particularly with India set to host its first ever Formula One Grand Prix, and F2 offers Parthiva the perfect platform to showcase his ability. He already has experience of racing at this level from last year, and I'm sure he will put that to good use and be a top ten regular in 2011."

Tom Gladdis aiming for the front on F2 return

Larkham against paddle shift in Supercars