Dean Stoneman claimed the 2010 FIA Formula Two championship today with a conservative drive to ninth place in the season's penultimate race at Valencia. Nicola de Marco took the victory, his second of the season, after fending off the challenge from ...

Dean Stoneman claimed the 2010 FIA Formula Two championship today with a conservative drive to ninth place in the season's penultimate race at Valencia. Nicola de Marco took the victory, his second of the season, after fending off the challenge from Will Bratt. 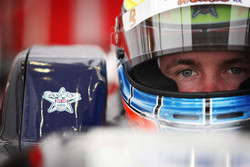 "It's fantastic to be sitting in this position," said Stoneman, clearly thrilled at having secured the title -- and a Formula One test. "Hopefully now with the Formula 1 test I can prove myself and go further on in motorsport."

Stoneman needed only to finish close behind title challenger Jolyon Palmer, as Palmer was 29 points behind entering the weekend, with a maximum of 25 points in the offing from each of the weekend's two races.

The Briton had looked strong in the morning's qualifying session, standing fourth on the timesheets with just four minutes remaining, but as the final frantic laps ticked down, Stoneman fell downwards and out of the top ten, while Palmer moved into seventh place.

While polesitter de Marco sprinted away from the field, followed by Will Bratt -- who moved up from fourth to second before the first corner -- Stoneman some moves of his own, passing two cars to move up from eleventh on the grid to ninth.

With Palmer stuck in seventh place, behind a queue of midfield cars, there was little point for Stoneman to try to force his way past the eighth-place Benjamin Bailly, and potentially risk losing the ninth-place points that would secure him the title.

For de Marco, though, the race was all about glory. Well out of championship contention, he drove hard to hold off Bratt for the duration of the race, and was rewarded with his second victory in the last five races.

"That was a fantastic race, I'm really happy with it," smiled de Marco. "Will stayed near me for the whole race so it was difficult, but it was really important for me to make another win."

Behind de Marco and Bratt, there was empty track, and then some more empty track: Armaan Ebrahim took third place, having started third, but finished nearly 18 seconds behind de Marco. Still, a first career Formula Two podium was no disappointment for the young Indian pilot.

A further second down the road from Ebrahim, Philipp Eng took fourth place, with Sergey Afanasiev in fifth. Benjamin Lariche was sixth, having lost out in a late-race scrap with Eng and Afanasiev. Palmer and Benjamin Bailly completed the top eight.

With his championship securely in his pocket, Stoneman is now free to drive his heart out in the final race. Third place in the title chase is still up for grabs, though, as Afanasiev leads Bratt by just five points and Eng by seven going into tomorrow's season finale.