Kazim Vasiliauskas closed out the FIA Formula Two 2010 season in style at Circuit Ricardo Tormo in Valencia, Spain. The Lithuanian gave his team a present with the victory after they pulled an all-nighter to repair his single-seater due to an ...

Kazim Vasiliauskas closed out the FIA Formula Two 2010 season in style at Circuit Ricardo Tormo in Valencia, Spain. The Lithuanian gave his team a present with the victory after they pulled an all-nighter to repair his single-seater due to an accident in Saturday's first race of the weekend. 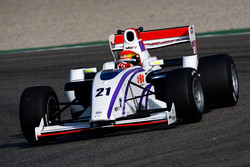 His first thank-you to his mechanics was to grab the pole for today's race; he then followed it up with the win in the final race of the season in the high temperatures of Autodromo Ricardo Tormo.

Vasiliauskas dominated the season finale race, leading essentially unchallenged from the lights to the chequered flag. At the finish, his edge over second-placed Jack Clarke was 2.517 seconds.

"The race wasn't easy because of the temperature but we still claimed victory," said the Lithuanian. "At the beginning I was really happy because I won, but then they told me that (Sergey) Afanasiev finished fifth, so I had finished (the season) four points behind him."

Clarke followed Vasiliauskas' formula, starting on the front row in second and ending his race without having to seriously defend his position -- but unable to get close enough to the leader to mount a serious attack, either.

"Being on the front row I was aiming to get a victory, which would've been the ultimate high to end the season, but it wasn't to be," Clarke mused. "I tried to get a good start but unfortunately Kazim got a slightly better one. At a couple of points it did look like I'd be able to use the boost and have a go at him, but he managed his car pretty well."

Dean Stoneman clinched the championship in yesterday's first race, and today showed again why he wears the crown. He started sixth and worked his way up to fourth on the first lap and then he found his way past Ivan Samarin to take third. It was Stoneman's 13th podium this season in 18 races -- a mark of the young driver's consistency a maturity.

"I was a lot more relaxed today as I've got a lot of weight off my shoulders," Stoneman said. "I just wanted to do the best I could, no pressure."

Samarin ended fourth, 21 seconds off the winner's pace, and was closely followed by his fellow Russian, Afanasiev, and Mihai Marinescu.

With early-season championship leader Jolyon Palmer finishing well back in 13th, Stoneman's final season score of 284 points easily outdistanced Palmer's 242. Afanasiev took third in the championship with 157, With Vasiliauskas another four points further back. Will Bratt's second place in yesterday's first race gave him fifth over Philipp Eng, 144 points to 142.

The F1 outcast who became a surprise star in 2018

Hulkenberg denies he could "slack" with Palmer as teammate