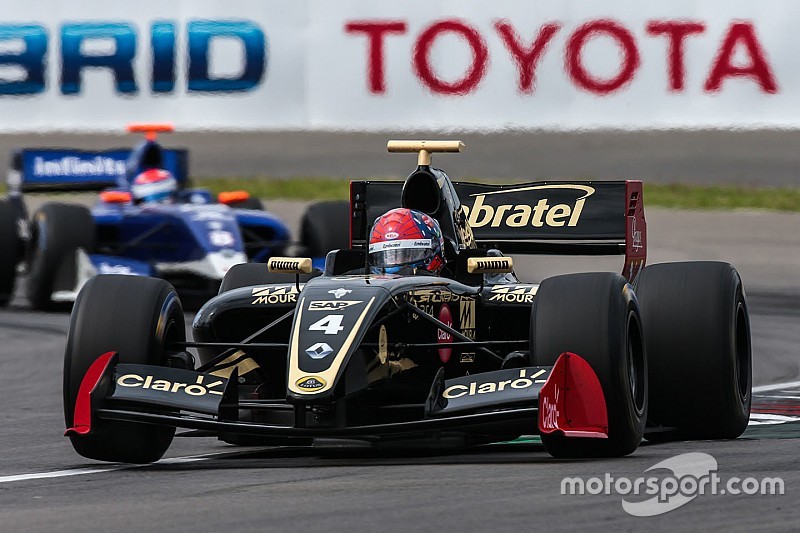 In his latest Motorsport.com column, Pietro Fittipaldi recalls the latest chapter of the roller coaster ride that is his Formula V8 3.5 campaign at the Nurburgring.

It seemed like at the Nurburgring we weren't as strong as on other tracks. Finishing the races in sixth and seventh, it wasn't the best weekend for the championship.

It could always be worse, but I wanted to leave for the summer break at least with a decent gap.

When I came into the weekend, I had a 14-point lead. Now I am five points away so at the end it is still close, anything is possible.

First weekend without a pole

For the first time this season I didn't get a pole position. We were struggling with grip all weekend, Rene [Binder, Lotus teammate] was struggling as well.

The first qualifying was a bit weird because there was a really dark cloud in the beginning and everyone went straight out, and it was just basically to get a decent lap time in before the rain came.

I had massive traffic on my lap but I was able put a time in that gave me second place. Then when we put the second new tyres on it started raining massively, so the qualifying was over.

The second qualifying was dry and I went out, I did my best but I just couldn't really maximise everything. So we were sixth, and we knew we had to maximise the first race, where I started from the front row.

Taken out by Palou

I had an average start in the first race, but I went into Turn 1 in third and then going into Turn 3 Palou locked up and just hit me in the rear. I anti-stalled, almost spun and came back on track in seventh.

I was really pissed, we went to the stewards afterwards and they gave him a warning that if he does something again he gets a double penalty.

He is not racing for the championship and it was the first lap of the race. He didn't do it on purpose he just made a mistake with these carbon brakes, but it really cost me a lot.

After that it was almost impossible to overtake, and I finished seventh, so that incident cost me all my important points.

It was really strange, in F3 when I raced at the Nurburgring there was some overtaking, but with the FV8 3.5 car it was just really difficult.

The only two places to overtake were Turn 1 and before the chicane in the penultimate corner. But when you were going to overtake you had take to risk, maybe some contact because you could never get a good enough run to pull side-by-side, you had to dive-bomb into the corner.

That didn't help, obviously I wanted to move forward and I couldn't do it.

Jerez was difficult but you could still do something, in Aragon the back straight is really big so you can always overtake there, but Nurburgring was hardest of all of them.

No progress in wet/dry race

In the beginning of second race it was wet so we started behind the safety car. I wanted it to rain because our pace wasn't exceptionally good in the dry; at least in the rain we could have a bit of a gamble.

The track started drying, we were waiting a bit and when it was dry enough we put the slicks on and we were really quick in the beginning. I caught a group of cars in front of me, I passed Diego Menchaca, and I started to put pressure on Roy Nissany.

Then the track started getting drier and I started losing my pace. I don't know why, but the other guys were quicker and I ended up sixth.

It's an almost two-month break until the next round but I'd like to just keep going. I would enjoy the break if I had a 50-point lead in the championship so I could just sit down, relax and take things slowly for the next race.

Now that everyone is so close in the championship [the top six are separated by 23 points], I wish the next race was next weekend, I want to go get back at it and win some races.

But the teams need a break they work really hard, and I'm sure it will go back quick because we have to get ready for the last three rounds in Mexico, Austin and Bahrain.

I believe I can win the championship but it will be tricky. I haven't been to Austin or Mexico, and I've never been to Bahrain in this car.

It is going to be tricky for the teams as well so it is really going to be a big fight, everyone will be pushing at its hardest and nobody knows what to expect when they get to the tracks. Whoever adapts fastest to the tracks might be a step ahead.

For these last three races I'm going to use the simulator more than ever, since we only have two 50-minute practice sessions when we get there. The most I can learn about the tracks the better, so I'll even watch race videos in F1 or other series.

I'll be calling my uncle Max Papis, he's been to Austin, and [uncle] Christian Fittipaldi has raced there as well. My friend Nelson Piquet Jr went to Mexico City, he only raced on the short track for Formula E but at least he'll know some corners.

So I will try to get as much input from these guys as I can so I can try to be one step ahead of everybody else.