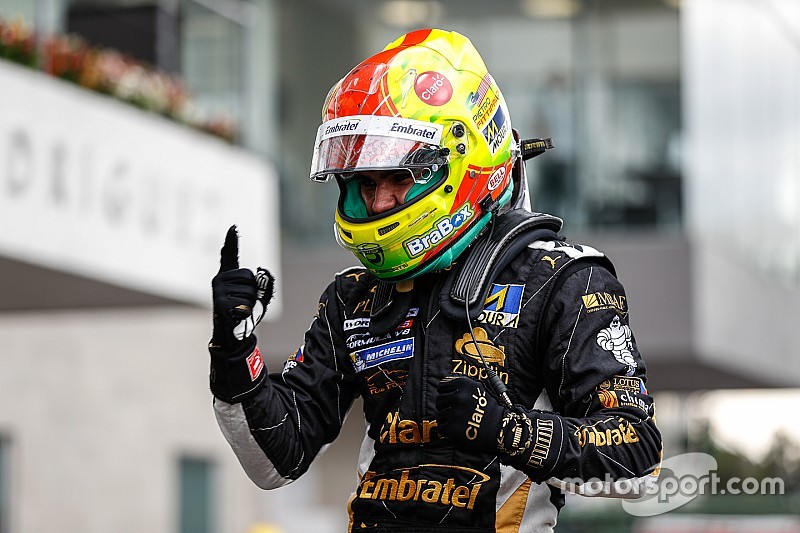 Starting from pole position, Fittipaldi made another great start and led teammate Rene Binder into turn one as the Austrian took advantage of Egor Orudzhev having a poor start to leap up to second.

Alex Palou, subbing for Nelson Mason at Teo Martin Motorsport, was another driver to make a good start and was third at the end of the first lap.

However, his race was ended on lap two as Orudzhev tried to squeeze up the inside of the Spaniard at Turn 1, only to clip Palou’s rear, sending them both into the barriers at the end of the main straight.

After a brief safety car period, it was Celis who was trying to make up ground as he fought Binder for second position. It looked like he had the spot at Turn 4, but Binder held the inside for the following corner and kept his nose ahead.

At the pitstops, Binder came out behind his teammate but ahead of Celis. The Austrian was then forced to retire a lap later with a car problem.

With Fittipaldi opening up a four-second gap at the front of the field, the focus became the battle for third as Roy Nissany attempted to hold off a recovering Matevos Isaakyan – who had stalled at the start.

Nissany, having a good race after a weekend filled with suspension issues, looked like he was going to hold on to a podium finish until Isaakyan tried to force his way past the Israeli on the run into turn 12.

The RP Motorsport driver held his position on the inside and the pair collided at the apex of the turn with Nissany hitting the barrier and Isaakyan losing half of his front wing but continuing to fourth place.

That allowed Tereschenko to complete the podium behind Celis, the latter not being able to make inroads into Fittipaldi’s lead.

Fifth place went to Diego Menchaca, who started from the pitlane after engine issues before the start, with Giuseppe Cipriani and Yu Kanamaru rounding out the classified entries.