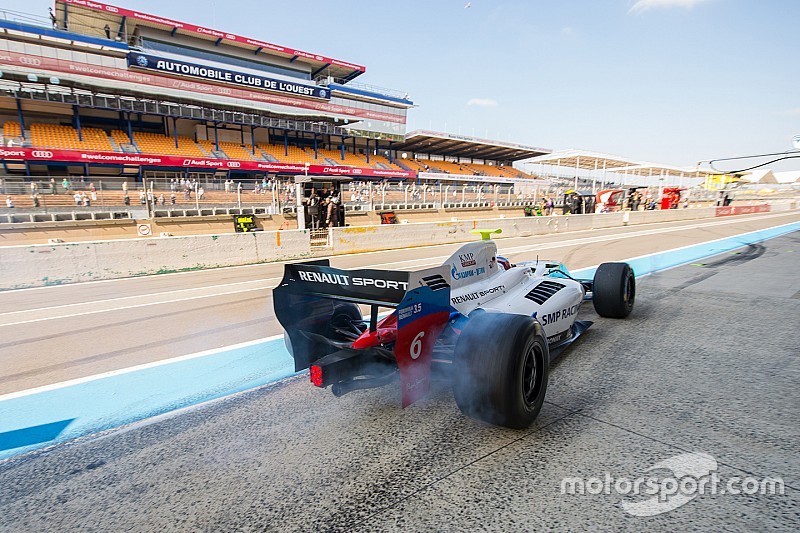 The two-day test, taking place on Tuesday and Wednesday, will feature all 10 teams announced for next year's rebranded, RPM-run Formula 3.5 V8 series, albeit newcomer squad Spirit of Race will only field one car for series frontrunner Matthieu Vaxiviere.

Championship-winning squad Fortec will field Eurocup title rivals Aitken and Louis Deletraz, with NEC champion Deletraz then staying on for a second day alongside Gustav Malja.

The Swede, who raced for Strakka this year, will partner Eurocup racer Jake Hughes in the British squad on Tuesday, with Hughes lining up alongside F3 rookie star Russell on Day 2.

Arden's Egor Orudzhev, who won two races for the team in 2015, will test with the squad for both days, with Jorg joining him on Tuesday and Aitken coming on board for Wednesday.

Tech 1 will field Russell alongside current driver Panis on Tuesday, with Panis and a yet-to be confirmed name doing Wednesday.

Frontrunning Lotus squad has unveiled only one driver for each of the days thus far, with Renault Sport Trophy runner Richard Gonda getting the nod on Day 1 and Jorg taking the reigns for Day 2.

Kirchhofer will spend both days with Spanish squad AVF, alongside the team's regular Alfonso Celis, who serves as the German's squadmate at ART in GP3.

Comtec, who have only been present at one round in 2015, have secured a full testing line-up, calling up Indian duo Jehan Daruvala and Mahaveer Raghunathan - the former a karting star in Britain and a FR2.0 NEC racer and the latter an F3 regular.

Carlin will have an all-Russian line-up with SMP-backed duo of Nikita Zlobin and F4 graduate Vladimir Atoev, while another SMP protege Matevos Isaakyan will partner Yu Kanamaru at Pons.