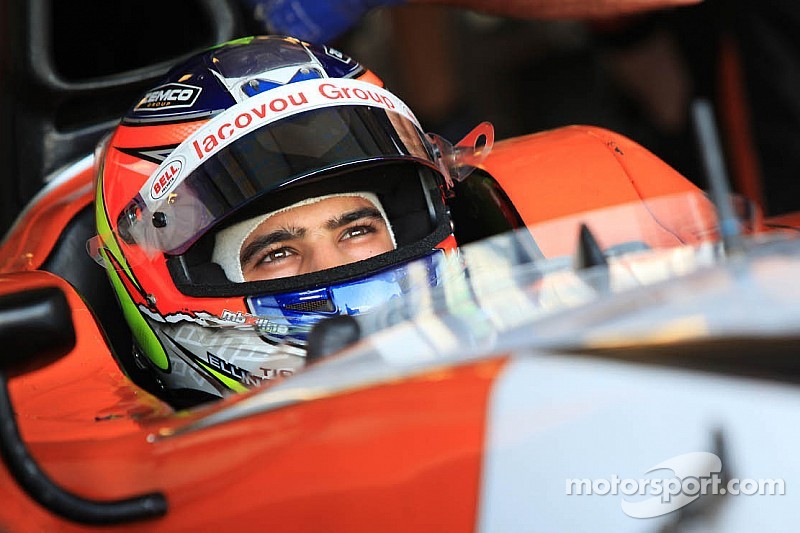 Day two of Formula Renault 3.5 Series collective testing at Cicuito de Jerez went the way of Tio Ellinas (Strakka Racing). On Friday, the Cypriot set quickest lap of the morning session in 1:28.260. He finished the day with best time, ahead of the fastest man in the afternoon, Matthieu Vaxiviere (Lotus), and Tom Dillmann (Jagonya Ayam with Carlin).

Optional yesterday, today the low-downforce aerodynamic configuration over the rear wing was mandatory for all the competitors. Both drivers and teams thus continued their preparation for the 2015 season with the regulations that will be in effect during Saturday qualifying and race 1.

Ellinas continues where he left off

During a very lively beginning, Tom Dillmann was first to break the 1.30 barrier, before his time was bested by Matthieu Vaxiviere. Before the mid-way point of the session, the Lotus F1 Junior Team driver was moved off the top spot by Tio Ellinas who clocked a lap in 1:28.260, before turning his attention to start simulations as did a number of other competitors. The Cypriot was quickest in a session that was interrupted five times, ahead of the two Frenchman, Beitske Visser (AVF) and Jazeman Jaafar (Fortec Motorsports).

Vaxiviere ends in the lead

Roy Nissany (Tech 1 Racing) was first onto the track in the afternoon. His time was soon beaten by Jazeman Jaafar and Oliver Rowland (Fortec Motorsports). Times didn’t drop until the final hour and it was Matthieu Vaxiviere moving to the sharp end of the order. The Fortec drivers answered, but 15-minutes from the end, the Frenchman set a best lap time of 1:28.759. He was followed by Oliver Rowland, Sean Gelael (Jagonya Ayam with Carlin), Tom Dillmann and Jazeman Jaafar at the end of a shortened session caused by the off of Aurélien Panis (Tech 1 Racing).

Tio Ellinas: “We have gotten off to a good start to the season at Jerez. The team worked hard on the set-ups, as much with high-downforce as low-downforce. With the low configuration, you have to really find your braking points and the high-speed corners are trickier, but I am convinced that everyone will get used as the level is high. We were quickly on top, while carrying out our program. We then were able to concentrate on start simulations and pit stops.”

Matthieu Vaxiviere: “Yesterday, we did a good job in low-downforce. Alas, no comparison, it was difficult for us to situate where we were, and we wanted to validate our impressions. Sadly, I made a mistake with my set of new tyres. Even so, the car is on pace and it was worth it to have a day when everyone turned me around! With the red flags and traffic, I had to settle for the second best time this morning, but then everything went according to plan. The year has begun well and the team is doing a great job. We are here to race for the title.”

Tom Dillmann: “With the team absent last year, this was a first proper test. It was difficult yesterday, but it all went well today and right from the beginning of the day. It seems we have a good car in low-downforce. I find the driving in low-downforce more pleasant: there is less drag and the top speed is slightly higher. We concentrated on the set-up, without worrying about setting a time because we have to be ready right from the first race. Taking my experience into account, the objective is to win the championship, but it is a long road. There are some good competitors, some are back and the team “is beginning”, so it will not be easy!”

Beitske Visser: “I was a little ill yesterday and I haven’t fully recovered. Like the others, we worked on the low-downforce configuration and set-ups. It was a little trickier, but everything went fine. In contrast to the other teams, we saved our second set of new tyres in order to take them to Motorland. We did a race simulation this afternoon and the times were quite good! We are satisfied with the work accomplished here.”