At the end of a red-flag bedevilled second qualifying session the surprise pole position sitter for tomorrow’s qualification race at Macau is Alex Lynn (Fortec Motorsport). Received wisdom says that rookies do not do well at Macau but clearly no one told Alex as he pipped Red Bull test driver Antonio Felix da Costa (Carlin) and 2011 Macau Grand Prix winner Daniel Juncadella (Prema Powerteam) to the top slot for the first of the two races.

As in yesterday’s session, there was a slightly tricky moment in the pit lane when the two van Amersfoort Racing cars of Lucas Auer and Dennis van de Laar just managed not to collect each other again. Perhaps it was just over-excitement as the session finally got started and ended up only being 15 minutes later despite extensive clean up work. Anyway, it soon started to look as if this would be a very quick session, with Felipe Nasr (Carlin) getting close to his fastest time in session 1 within a lap of leaving the pits. However, he (and everyone else) had reckoned without the capacity Macau has to trip up even the best drivers. 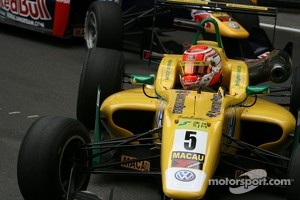 Although the rain we had been promised did not materialise, the track was very slippery after a series of accidents in the preceding sessions for touring cars, and at the start of the session the screens were warning of conditions on the run up to Police bend. Sadly some people didn’t seem to take this on board and the competitors had barely completed their first flying laps when the first stoppage occurred. The guilty party on this occasion was Felix Serralles (Fortec Motorsport), the rookie slamming into the barriers at the start of the section the warning applied to. The officials hauled out the red flags and everyone apart from Serralles filed back into the pits, leaving the Puerto Rican to watch sheepishly as his car was craned away.

At the restart there were 23 minutes left to run and apparently it was still slippery between posts 13 and 14, which was no surprise given the amount of cement dust the marshals had needed to cover up the fluids spilled by the dead Fortec Dallara. Anyway, Juncadella didn’t let it slow him down any, pushing hard from the off, only to have to haul on the anchors after Sven Müller (Prema Powerteam) shot up the escape road at Lisboa and needed some time to sort himself out. After he had been retrieved and sent on his way Jazeman Jaafar (Tom’s) had a bit of a moment and also needed pushing back into contention.

By the time the track was cleared properly half the session was over, but then results started to come after that. Juncadella improved to go 2nd, while his team-mate Raffaele Marciello was fast enough to claim 6th. A lap later and Juncadella was within 0.001 seconds of provisional pole man Felix da Costa’s time, and it looked as if we were set for a great battle for dominance. Hannes van Asseldonk (Prema Powerteam) was also on the move and went 12th, but the top ten proved elusive. Nasr was pushing on and slotted into 6th, and Daniel Abt (Carlin) claimed 8th. Pipo Derani (Fortec Motorsport) also improved for 9th, while Carlos Sainz Jr (Carlin) was also 0.001 seconds off his target, in this instance Mucke Motorsport’s Felix Rosenqvist who was 3rd at this point.

And then Sector 3 was yellow again and everyone had to slow down, the cause this time being Luis Sá Silva (Angola Racing), his car in the wall at Fisherman’s Bend. He was removed quite quickly and again the pace began to pick up, with Harry Tincknell (Fortec Motorsport) improving to claim 8th, while Marciello went quicker but stayed 6th, and Nasr moved up a place to 5th. Just to top it off, Jack Harvey (Carlin) broke into the top 10, just as Lynn found a quarter of a second from somewhere to claim pole. He was lucky to get the lap when he did because he had no sooner crossed the line when the session was stopped yet again.

This time it was Auer who had gone off. He’d hit the wall hard and made a considerable amount of mess in the process. So again everyone had to return to the pits and sit around waiting to go back to play. The order at this point was Lynn, from Felix da Costa, Juncadella, Rosenqvist, Sainz Jr, Nasr, Tincknell, Pascal Wehrlein (Mücke Motorsport), Marciello and Derani. 11th was Harvey, from Abt, Alexander Sims (ThreeBond with T-Sport), Serralles, van Asseldonk, Tom Blomqvist (Euro International), William Buller (Carlin), Hideki Yamauchi (B-Max Engineering), Jaafar, Müller and Kevin Korjus (Galaxy Double R Racing). In 21st it was Mitchell Gilbert (Mücke Motorsport), ahead of Yuichi Nakayama (Tom’s), Jimmy Eriksson (Galaxy Double R Racing), Auer, van de Laar, Sa Silva, Lucas Wolf (URD Rennsport), Ryo Hirakawa (CKMG by RSS) and Andrea Roda (Jo Zeller Racing).

And so, with 5 minutes and 4 seconds left on the clock when they started the first timed lap it was set to be a sprint to the finish. Except it wasn’t because within seconds the red flags were back out after Nasr lost it at R Bend and slammed hard into the wall on the outside, wiping pieces of the car in abundance and narrowly missing being collected by Abt, who arrived just as the Brazilian bounced back across the track. There was no point in restarting the session at this stage and so that was it for the day.

Once the results were issued it was clear that a delighted Lynn was on pole by quite a large margin as one of the few drivers who didn’t have his best effort ruined by traffic, stoppages or both. Da Costa starts 2nd, from Juncadella, Rosenqvist, Sainz Jr., Nasr, Tincknell, Wehrlein, Abt and Marciello. 11th will be van Asseldonk, from Derani, Harvey. Sims, Serralles, Blomqvist, Buller, Yamauchi, Jaafar and Müller. Korjus ended up in 21st from Gilbert, Nakayama, Eriksson, Auer, van de Laar, Sa Silva, Wolf, Hirakawa and Roda. While Lynn fully expects the more experienced guys behind him to “show me how it’s done tomorrow” he can be very pleased with his rookie effort on this tricky street track.

Rosenqvist and Juncadella on second grid row on Macau GP

More from
Daniel Abt
Formula E