The Carlin team today added further silverware to that already won this season in the Cooper Tires British Formula 3 International Series with a resounding victory in the Formula 3 Macau Grand Prix.

The Surrey-based team and its Portuguese driver Antonio Felix da Costa won the 30th running of the blue riband F3 race by a 1.5s margin after 15 laps around the Guia street circuit. Nine of the top 12 finishers drove Dallaras fielded by British teams. 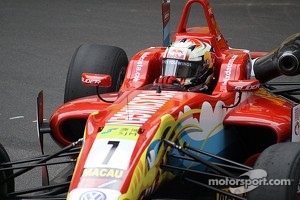 Da Costa started from pole position after winning yesterday’s qualification race. He lost the lead to Mucke Motorsport driver Felix Rosenqvist at the start but regained top spot into the right-hander at Lisboa on the opening lap and held on in front to the chequered flag.

“Every lap we were on the limit,” said da Costa. “I have to thank my team: Carlin put an amazing package together. There are so many good names on the list of winners of this event, and now my name is there too. It was tight between all of us and I think we put on a really good show.”