Portuguese António Félix da Costa, who raced in the 2010 Formula 3 Euro Series, celebrated the biggest success of his career to date in Sunday’s Macau Grand Prix.

At the end of the race at the 6.12 kilometres long Guia circuit, he had an advantage of 1.573 seconds from Felix Rosenqvist (Mücke Motorsport), the best-placed Formula 3 Euro Series driver. 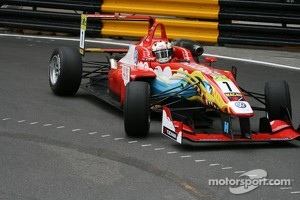 Felix Rosenqvist took the lead at the start, but wasn’t able to hold on to it for a long time.

On the way towards the Lisboa corner, António Félix da Costa and Alex Lynn overtook the Swede, who still managed to finish second.

The race was unusually calm: there was only one safety car intervention following a collision from Lucas Wolf (URD Rennsport).

António Félix da Costa (Carlin): “Winning here is incredible. I was at the limit all the time, I drove 15 laps almost without any mistakes and now, I am incredibly happy. The final two laps were particularly emotional. This victory is the biggest in my career to date.”

Felix Rosenqvist (Mücke Motorsport): “It was a close race. At the start, I was briefly in the lead, but I wasn’t able to keep this position. Actually, I wanted to win here and I came close, too. Perhaps, I can also be happy with second place in a couple of hours.”

Pascal Wehrlein (Mücke Motorsport): “Fourth place is not too bad for a rookie. Throughout the weekend, I have been able to improve my performance.

Halfway through the race, I had problems with the handling of my car and I decided to back off a little, because I had probably worn out the tyres too much in the early stages. Towards the end, it got better again.”