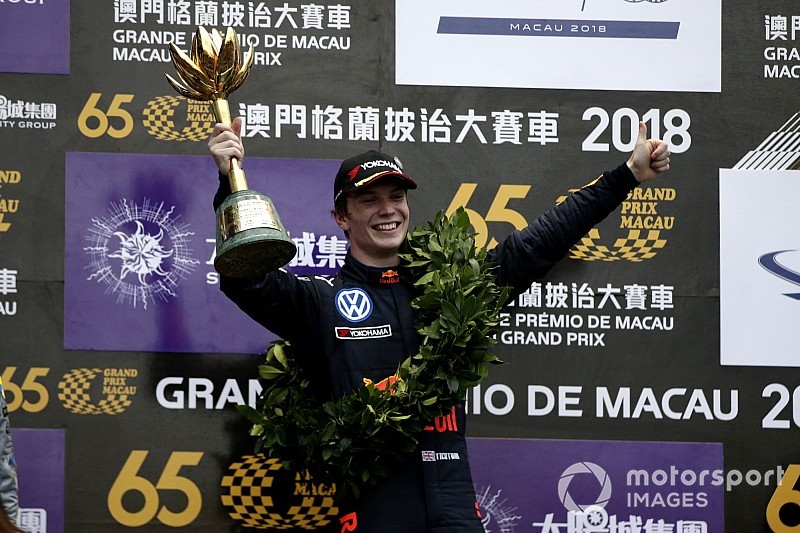 McLaren Autosport BRDC Award winner Ticktum led from start to finish in a race that was red-flagged for a lengthy period following a shocking accident for Sophia Florsch and Sho Tsuboi.

Following an early safety car, Florsch was running 16th when the race restarted. Florsch arrived at Lisboa with two wheels missing after contact along the straight, was launched over the kerb and then ramped over Japanese F3 champion Tsuboi, who was just turning into the corner in 14th position.

The German went over the barriers, through a safety fence and into a marshals’ and photographers’ area. Florsch, Tsuboi, two photographers and one marshal were transported to hospital; all were conscious.

Ticktum made a very early break at the restart to put a gap on Sacha Fenestraz, who had slipstreamed past Callum Ilott and front-row starter Joel Eriksson at the initial getaway.

Eriksson left his braking to the very last moment to squeeze down the inside of Fenestraz and take second place, before setting off after Motopark team-mate Ticktum.

The BMW DTM racer’s chase of Ticktum seemed forlorn, but he got another bite of the cherry when Enaam Ahmed crashed out of 11th place at Moorish, his third shunt of the weekend.

There were only four laps of racing remaining when the safety car returned to the pits, and within two tours Ticktum had extended his lead to 1.513 seconds, He finally crossed the line 1.208s clear of Eriksson, while Carlin-run Renault F1 junior Fenestraz completed the podium.

Jake Hughes took fourth for Hitech GP, and was closing in on Fenestraz over the late stages.

Ilott lost out in the slipstream not only at the start, but also at the red-flag restart, when F3 European champion Mick Schumacher passed him for fifth. Ilott then got engaged in a cat-and-mouse battle with Ralf Aron, with the Estonian getting through to chase Prema Powerteam stablemate Schumacher home.

Motopark’s new Red Bull Junior Juri Vips, who had fallen to 10th on the opening lap, also got past Carlin F3 returnee Ilott to take seventh on the final lap at Lisboa.

The initial safety car was caused by two separate crashes at Lisboa on the first lap: Marino Sato shunted on the exit, while Alex Palou went into the barrier on the entry, and Charles Leong and Keyvan Andres got caught up in a chain-reaction collision behind the Spaniard.