After a race of more than normal lunacy even for Macau, Edoardo Mortara (Signature Plus) emerged the winner, after getting the drop on initial leader Keisuke Kunimoto (Tom's Toyota), while Roberto Streit (Raikkonen Robertson Racing) survived a near ...

After a race of more than normal lunacy even for Macau, Edoardo Mortara (Signature Plus) emerged the winner, after getting the drop on initial leader Keisuke Kunimoto (Tom's Toyota), while Roberto Streit (Raikkonen Robertson Racing) survived a near miss to come home 3rd. This was after a series of first lap accidents that necessitated a Safety Car period of three laps. 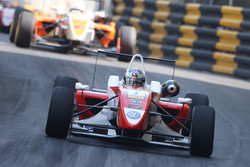 Of course everyone knows that the important thing at Macau is to survive the qualification race, and that the Grand Prix is not won on the first corner. Or at least everyone knows this till the lights go out and the engine revs build. At the start Carlo van Dam (Tom's Team) was relatively slow away from pole, which allowed Kunimoto to snatch the lead. Van Dam tried to get it back into Mandarin but ran too wide and ended up touching the wall and collecting a puncture, which allowed Mortara to take a look at the Japanese. As the two of them almost touched, Streit held his breath, knowing that if they crashed, he'd very likely be joining them. Meanwhile, van Dam tried to limp back to the pits only to collide with Renger van der Zande (Prema Powerteam) on the way through San Francisco, the latter taking it very badly and insisting that van Dam had done it on purpose, something that seems highly unlikely.

Behind the battling front runners, James Jakes (ART Grand Prix) and Brendon Hartley (Carlin Motorsport) banged wheels, the Kiwi limping round with front suspension damage - a move that required a multi-point turn to get round the Melco Hairpin - while Jakes was out on the spot. In all fairness Jakes admitted it was his fault and even sought out Hartley afterwards to apologise. However, this was as nothing compared to the utter chaos that broke out at Lisboa when Jules Bianchi (ART Grand Prix) made an utter nonsense of it and spun, causing a chain reaction that involved Walter Grubmuller (Hitech Racing), Roberto Merhi (Hitech Racing), Koki Saga (Le Beausset Motorsports), Atte Mustonen (Raikkonen Robertson Racing), Kei Cozzolino (Now Motor Sports), Masaki Matsushita (PTRS by Ombra), Jon Lancaster (Manor Motorsport), Basil Shaaban (HBR Motorsport) and Cong Fu "Franky" Cheng (Signature Plus). With so many cars facing all sorts of directions, and some of them beached on the kerbs, this was going to take some sorting out. The only option was the Safety Car. 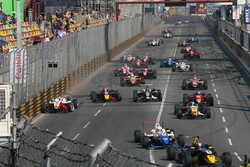 Needless to say it was quite a while before we could go racing again. Three laps elapsed while the marshals worked flat out to get the debris cleared away. Finally, with 7 laps left to run, the Safety Car pulled off and the race went live again. Kunimoto controlled the start beautifully, leading Mortara across the line as the rest jostled for position. Seemingly they'd all calmed down a little, with the possible exception of Shaaban who set the fastest lap of the race to this stage, though admittedly that was because he was busy catching the pack behind the Safety Car. At least he hadn't sustained any damage in the accident, unlike Merhi who pitted during the Safety Car period, and Oshima who came in just as it ended and retired from the race. Instead Shaaban saved his best effort for the following lap when he crashed at Reservoir, thus joining the retirement list on the spot.

At the front although Kunimoto was still leading, Mortara was beginning to look for a way past. Streit was still with them but he had his hands full defending from Turvey, who was perhaps slightly distracted by Bird, who in his turn was being harassed by Alguersuari. There was something of a gap after that back to Maki, who was having trouble with Coletti and Ericsson. Meanwhile, as we reached half distance Ho managed to get it all wrong at Police, and would have caused a jam were it not for the fact that only Matsushita was still behind him by then. Matsushita managed to squeeze past the stricken local and kept going, while Ho was craned away.

After that the action was concentrated closer to the front, Mortara finally making his move into Lisboa on lap 6, driving round the outside of Kunimoto to snatch the lead. It was a brave move, and Kunimoto had no answer, preferring not to get into a fight that might affect his chances in Sunday's Grand Prix. Mortara, meanwhile, demonstrated just how fast he was by pulling out a comfortable gap over the course of his next lap. Streit was now catching the second placed man, but he was keeping a close eye on his mirrors and Turvey was worrying him. That meant that the fastest laps were coming from further back, initially from Coletti, then Ericsson, and finally from a less than happy Hartley who was back out but two laps down. 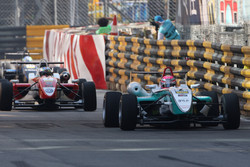 The next three laps were relatively calm and it looked as if we might make it to the end with no further retirements, and so we did. But we didn't get there without any further chaos, and this time it was all caused by one man. With a lap to go Maki pranged it at R bend, scattering debris everywhere, but he kept it going, despite a rear puncture and a deranged rear wing, going off at Mandarin, going up the escape road at Lisboa, getting it all wrong at Police and finally dragging it across the line on three tyres, dropping to 16th in the process. It was quite a feat and Melco can't have been at all easy.

Meanwhile, apart from the crazed Finn, Mortara was still in the lead when they crossed the line for the final time, heading home Kunimoto, who wasn't at all disappointed at being second, and Streit, who was finding the car less than perfect in the final sector of the track. 4th was Turvey, from Bird, Alguersuari, Coletti, Ericsson, Campos Hull and Cozzolino. 11th was Winslow, from Vanthoor, Lancaster, Saga, Grubmuller, Maki (though not all of the car made it with him), Merhi, Matsushita and de Marco. Hartley was the last finisher though he wasn't classified. He did, however, set the fastest lap of the race which was probably no consolation at all, knowing Brendon.