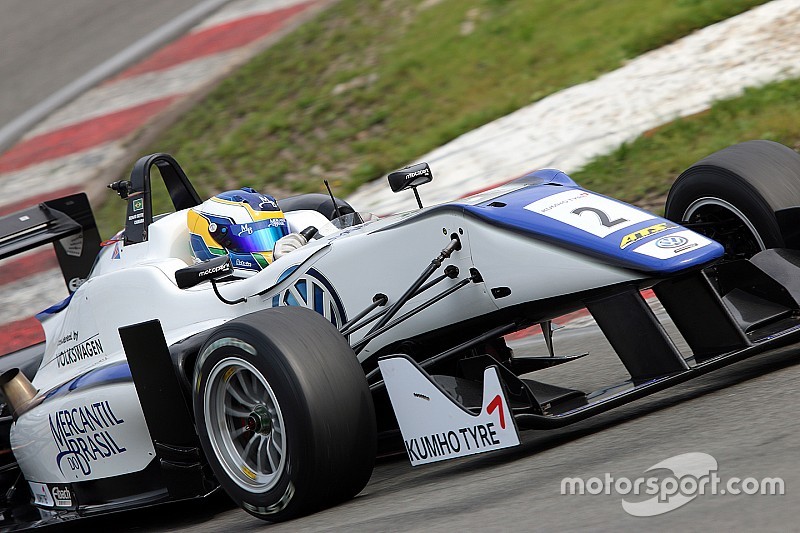 Sergio Sette Camara secured pole position for the qualifying race of the Masters of Formula 3 at Circuit Park Zandvoort, beating Antonio Giovinazzi by a narrow margin.

For the first time in the event's history, organisers have copied the famous Macau F3 format with a session that will determine the grid positions for the Saturday race. The outcome of that race will be the running order for the one-hour main event on Sunday.

The drivers started the 30-minute qualifying session on a mostly dry track, which resulted in improved laps every time the 18 pilots completed the 4.3km course.

In the absence of two-time Masters of Formula 3 winner Felix Rosenqvist, all eyes were on current European F3 points runner-up Giovinazzi. The Italian set a clear benchmark halfway through the session before the drivers pitted to acquire a fresh set of tyres.

Markus Pommer was first to better Giovinazzi's time at the Dutch track, but didn't hold provisional pole for long. The German got first beaten by his rival by just 0.071 seconds and, in the final two minutes, Pommer's teammate Sette Camara lapped even quicker and secured pole position.

“Since practice yesterday we knew we would be competitive, so it’s not a big surprise to qualify at the front,” said Sette Camara. “There were still some wet parts on the track, but the balance of the car was perfect and we managed to squeeze a good lap at the end of the session.”

The qualifying race over 12 laps takes place on Saturday afternoon.

The race on Sunday, meanwhile, will last a full hour and will determine who’ll become the 25th ‘Master of Formula 3’ and will be following in the footsteps of Lewis Hamilton, Nico Hulkenberg, Valtteri Bottas, Felix Rosenqvist and last year’s winner Max Verstappen.