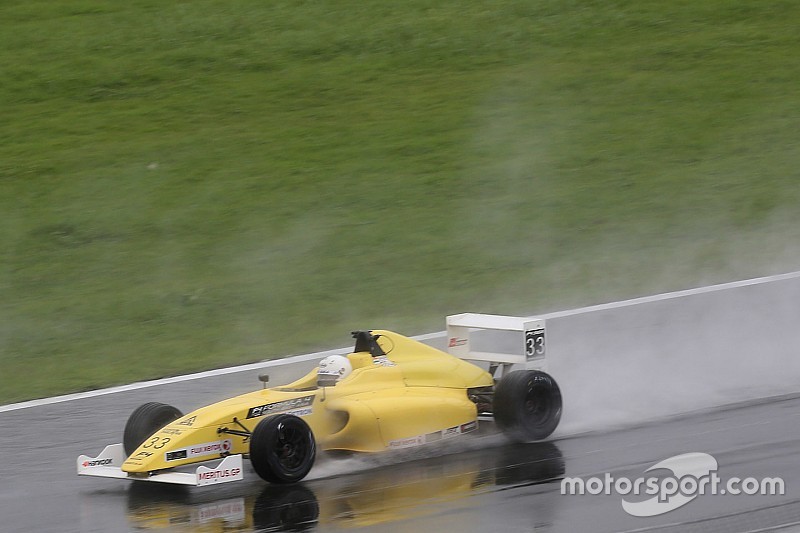 After a double win on Saturday, Akash Gowda had the lone podium finish on Sunday in Race 4, under torrential conditions in Philippines.

With typhoon hitting the Clark circuit, the races on Sunday in Round 2 of Formula 4 South East Asia championship turned out to be hugely difficult for the drivers.

The morning's Race 3 was cut short due to heavy run with part of it run behind the safety car after several drivers were caught off guard in the slippery conditions.

Before the race was red-flagged, polesitter Faine Kahia had lost his lead to debutant Gabriel Cabrera, who took his maiden win from another newcomer Khalid Al-Wahaibi.

Behind the top two, Angie King completed the podium, with Kahia retiring as did Gowda. Meanwhile, Mohammed Nalwalla ended a solid fifth.

With rain continuing to fall, the fourth race of the weekend saw poleman Presley Martono drop to fourth at the start, allowing fast-starter Al-Wahaibi to shoot from sixth into the lead.

It was not long that Martono re-gained his composure and was right on the tail of Al-Wahaibi, while Gowda, Kahia and Cabrera battled for third.

After a brief safety car period, the race resumed with the top five settled in the order, but an unfortunate retirement to race leader Al-Wahaibi, gave Martono the lead.

The Indonesian managed to keep Gowda at bay to claim his maiden win, while the Indian settled for second and Kahia edging out Cabrera for third.

Nalwalla, who started from the front-row was caught out in the wet conditions and dropped to finish eighth behind King.

Race 5 turned out to be the last one of the weekend after the final race was postponed for a later date as conditions worsened at Clark.

The fifth race saw Kahia and Martono battle for win after polesitter Cabrera dropped back into the clutches of Al-Wahaibi and Gowda.

The Indian was able to get past the Omani driver and catch Cabrera, but with the rain getting stronger, the officials ended the race with three laps remaining.

Thus, Kahia took win from Martono, while Cabrera kept third with Gowda having to settle for fourth. Nalwalla, meanwhile, retired ending a tough second round for the teen.

For two race wins and a podium finish, Gowda was given the 'Petran Star Driver' award for the second round of the season.

"What an amazing weekend this has been for me! Admitted the conditions were really difficult with the heavy rains," reflected Gowda.

"I do enjoy racing in the rain but it was very difficult this weekend and very unpredictable. Overall I am really happy with the result, two wins and a podium in Race 4.

"In Race 4, I tried several times to close in on Presley [Martono] but he proved a difficult man to overtake! It was a really good race though," he added.