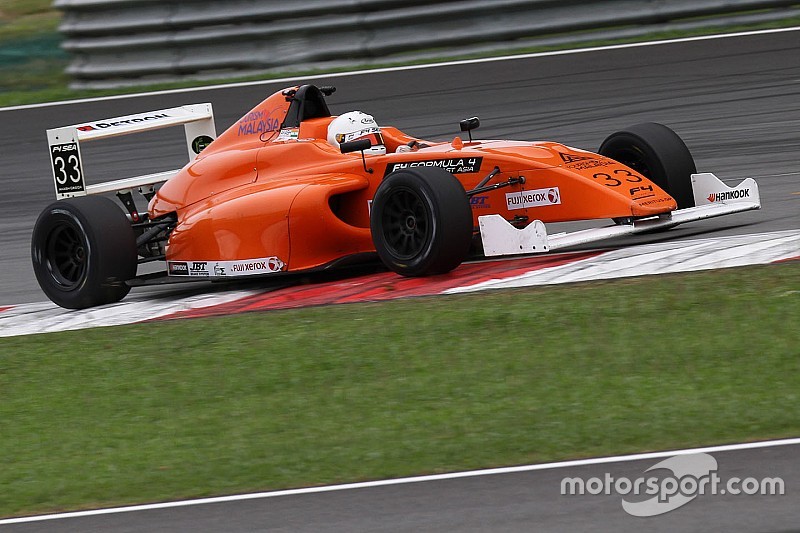 Akash Gowda got off to a difficult start in the final round of Formula 4 South East Asia Series, with the Indian scoring a couple of fifth positions on Saturday.

During Friday’s sole practice session, Gowda finished in fourth place, before qualifying his car in sixth for Race 1.

In Saturday’s opening race, Gowda was involved in a lengthy scrap with Oman’s Khalid Al-Wahaibi, the duo also knocking on a podium spot while being indulged in a battle of their own.

However, the status quo was maintained with Gowda finishing fifth at the flag, crossing the line less than a second behind Wahaibi.

At then head of the pack, Isyraf Danish took a dominant win after front row starters Presley Martono and Daniel Frost took out each other early in the race.

Behind, Eric Louis took the runner-up spot while Faine Kahia ended up third after losing a position at the start.

Gowda spent much of the second race away from the spotlight, finishing down in sixth place.

However, there was plenty of action at the front of the field with Kahia making a costly mistake on the final lap of the race, allowing Mortono to nick the victory.

It was an impressive win by the Indonesian driver who was forced to start from the back of the pack following his collision in Race 1.

Behind Mortono and Kahia, Frost momentarily stole P3 from Danish, only for the latter to fight back and reclaim the final podium spot.

Another fifth in Race 3

Race 3 was a similar affair for Gowda, with the Indian minding his own business away from the top runners.

Having started from sixth on the grid, he was able to gain a place due to pole sitter Eric Louis’ troubles, and add another top five finish to his tally.

Meanwhile, Frost made it three different winners after passing Louis for victory in the second lap of the race.

Behind, Martono and Danish enjoyed a drag race to the finish line, with the former nicking the second spot by just 0.036s

Troubled end to the day’s proceedings

Gowda’s day ended on a sombre note with the 18-year-old finishing at the bottom of the timesheets in Race 4.

After 10 laps of racing, he ended up eighth at the chequered flag, over 16 seconds behind race winner Martono.

Martono, meanwhile, barely managed to keep his nose ahead of a fast-charging Danish, the Malaysian nearly stealing victory on the run down to the finish line.

Away from the battle for the lead, Kahia continued his podium run with a third place finish at Sepang.