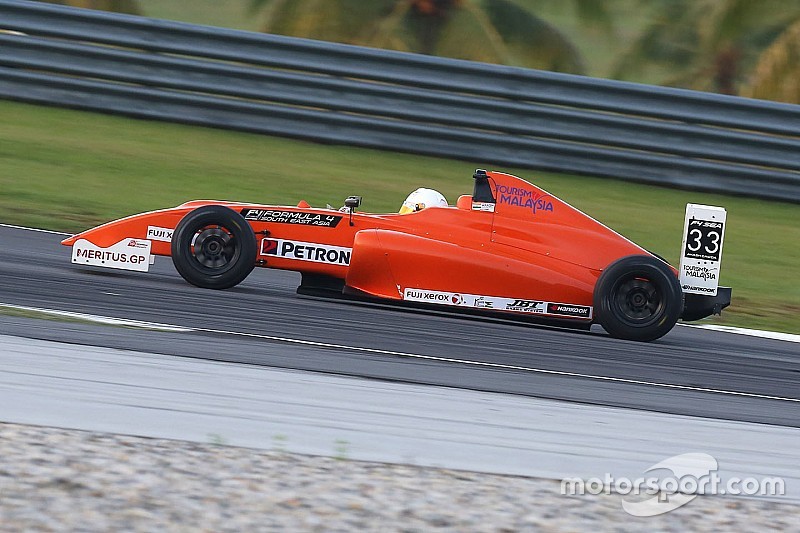 Akash Gowda overcame a challenging start to the final round of the Formula 4 South East Asia Championship to win the last race of the inaugural season.

The Bangalore-born driver had a difficult Saturday with two top finishes in the four races, unable to fight for wins or podiums.

But the Indian driver had his settings changed on the car enabling him to fight with the lead group in the two remaining races on Sunday.

Having started from the last row of the grid, Gowda made steady inroads in the 8-lap race at Sepang circuit on the final day in the championship.

By the second lap itself, the Indian got himself into the podium battle with Faine Kahia and Daniel Frost, as the Kiwi struggled to hang on.

Both Frost and Gowda managed to take Kahia on Lap 3 to set on their duel for the final podium spot, while leaders Presley Martono and Isyraf Danish were long way ahead on the road.

Even though Danish clawed into Martono's lead, but the Indonesian had just enough to win Race 5 by a mere 0.085s, while Frost held off Gowda over the line - the two separated by 0.210s.

Win to round off season

Starting the final race from the front-row, Gowda made the perfect run down the first corner to lead the race from polesitter Khalid Al-Wahaibi.

After the first few laps of close battle, Gowda had pulled up a hefty gap from Al-Wahaibi, who had to defend his second place from Danish, Martono and Frost.

The Indian dominated the proceedings then on, winning by a margin of 7.152s with Al-Wahaibi managing to hold on to second by a mere 0.821s from Danish.

"I had a really really good start from P2 on the grid and managed to overtake Khalid [Al-Wahaibi]. From that point on, all I was focused on was just the road ahead," said Gowda.

"I knew that there would be a lot of battles behind me, so I kept my focus on that to pull away and keep the pace consistent.

"It is a great way to end the championship as I finally made it to the podium with the win! I would like to thank my amazing driver coach Armaan Ebrahim, my family and especially the mechanics.

"As we had a few issues to work through over the weekend, they did an amazing job to try and fix it, and the results proved it," the Indian added.

Indonesia's Martono was declared the overall champion in the prize gala with Kiwi Kahia second and India's Gowda third.