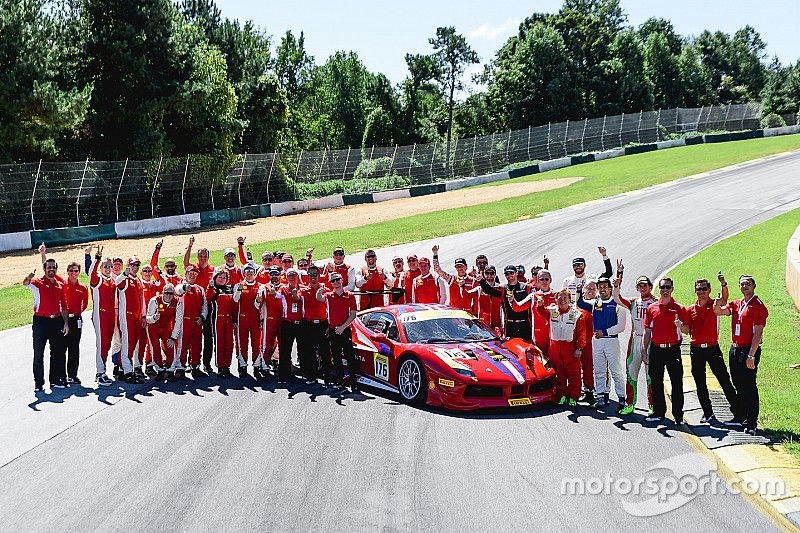 In a weekend that saw both rain and sunshine, the Ferrari Challenge 458 EVO and Coppa Shell titles were decided at the Road Atlanta circuit.

As the North American leg of the 2018 Ferrari Challenge NA season came to close, two champions were crowned at Road Atlanta.

Now all that remains is the Finali Mondiali at the Autodromo Nazionale di Monza.

With a victory in Race 1 and and another strong run in Race 2, Cooper MacNeil (Scuderia Corsa – Ferrari Beverly Hills) already has one hand on the championship trophy. MacNeil didn't dominate Saturday's race as his rivals were never too far behind, but he was able to stay in control from the green flag to the checkered flag for his eighth victory of the season. Benjamin Hites (The Collection) was able to put some recent bad luck behind him and finish second, splitting the title rivals. Peter Ludwig (Wide World Ferrari) had to settle for third, dropping him a further eight points behind MacNeil.

Race 2 was a very different story as Ludwig absolutely dominated the wet race, winning by a massive margin of 36 seconds. In fact, MacNeil didn't even place on the podium, finishing fourth and allowing Ludwig to regain lost ground from the first race. Hites once again finished in the runner-up position for one of his best showings this year. Christopher Cagnazzi (Ferrari of Long Island) slotted in third for just his second podium this year. There's now 29 points between MacNeil and Ludwig ahead of Monza.

The title battle gained new life in the Am division however. Ross Chouest (Ferrari of Palm Beach) responded to the pressure and swept the weekend, trimming 20 points off the lead of Rob Hodes )Scuderia CAVA - Ferrari), who finished a disappointing fourth in both races.

It was Chousest's first weekend sweep of the year, but it couldn't have come at a better time as he now heads to Monza just five points back of the points lead. Murray Rothlander (Ferrari of Vancouver), who finished second in both races, was also able to insert himself back into the title discussion. He stands 14 points back of the lead and nine back of Couesest, making it a three-way fight for the crown. Both races ended up with identical podiums as John Boyd (Ferrari of Denver) placed third in both races.

Despite clinching the title, the weekend did not go perfectly for Tippl, but perhaps that was by design. In tricky conditions, the newly crowned rookie champion took it easy and finished a quiet fifth, ending his streak of victories and allowing a new name to stand at the top of the podium. That name would be Geoff Palermo (Ferrari of San Francisco), scoring his first win of the 2018 season. Fuller and Carel once again rounded out the podium.

Am driver John Megrue (Ferrari of Long Island) solidified his place at the top of the standings, sweeping the weekend and extending his points lead to 23 markers. Both he and Kevan Millstein (Scuderia CAVA – Ferrari of San Diego) impressed with their pace in comparison to the other Coppa Shell drivers as the battled amongst Fuller and Carel throughout Race 1. Bradley Smith (Scuderia Corsa – Ferrari of South Bay) placed third in class, but a 30-second time penalty dropped him behind Keith Larson (Ron Tonkin Gran Turismo) earned third place on the road, however a 30 second penalty for a pass under the loan caution of the race dropped him down the order and promoted Keith Larson (Ron Tonkin Gran Turismo), who was making his first start of the year.

Race 2 was bit more chaotic with carnage highlighting the event, but Megrue was able to avoid the misfortune en route to his sixth win of the year. Dale Katechis (Miller Motorcars) placed second and Smith found redemption after Saturday's penalty, taking the final step on the podium for himself.

Martin Burrowes (Ferrari Ft Lauderdale) fought off both James Walker (Ferrari of Houston) and Trevor Baek (Ron Tonkin Gran Turismo) in a thrilling battle for the win in the 458 race, capturing his fifth win of the season in Race 1 at Road Atlanta. The victory allowed Burrowes to solidify his place as the 2018 champion with a race to spare, dashing the waning title hopes of Walker and Baek.

Having already clinched the title and facing treacherous conditions in the rain on Sunday, Burrowes opted not to take part in the event. This allowed Walker and Baek to engage in a thrilling battle for supremacy as the rain came down. Despite their heated battle for the lead, both drivers were able to run a pace that allowed them to lap the entirety of the field in a remarkable show of dominance. The two drivers never made contact and ultimately, it was Baek who prevailed for his first win of the season. Tony Ferraro (Ferrari Ft Lauderdale) placed third.

All that remains in the 2018 season is the annual Fianli Mondiali in Monza, Italy. The event is set to take place in the first week of November and roughly 30 North American teams are expected to make the journey across the Atlantic.