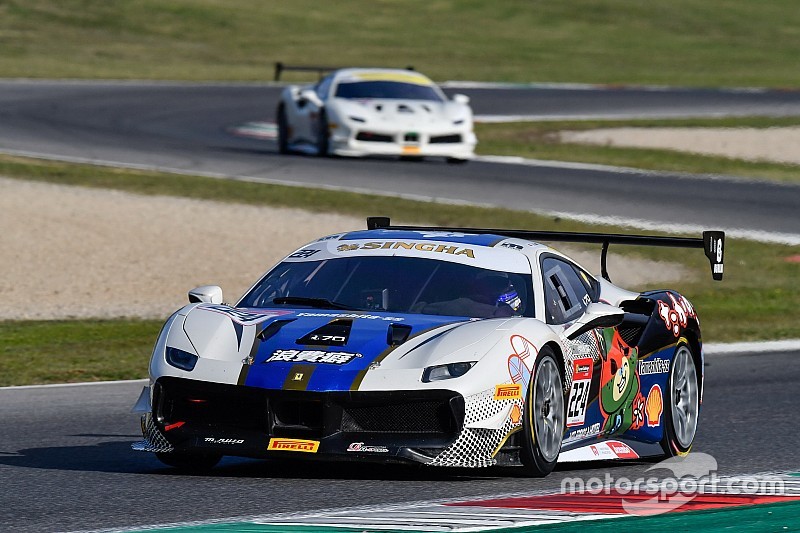 Max had taken pole earlier in the day but lost it almost instantly as a blistering start from Tadakazu Kojima meant he passed the polesitter and fellow front row man Phillipe Prette for the lead on the run to Donato.

Kojima quickly built a lead of over a second by the following lap but he was then quickly reeled in by Max and Huilin Han, having passed championship favourite Prette for third moments earlier.

Just as Prette joined the battle to make it a four-way fight a safety car was called after Yanbin Xing crashed when the rear of his CTF Beijing Ferrari became unsettled and Karim Nagadipurna spun off track.

Once the lengthy safety car period ended the four-way battle for the lead resumed and after Max had initially fallen to fourth, he took advantage of a messy contest between Prette and Han to jump the pair for second on the seventh of 14 laps.

He quickly closed to the rear of Kojima’s Rosso Scuderia Ferrari and then made the decisive pass for the lead through the quick left-right of Scarperia and Palagio.

Max then cantered into the distance as the battle for second continued with Han holding off Prette after squeezing his rival on the exit of the first corner late on.

Angelo Negro took fifth in his Ital Auto Shanghai Ferrari after making up a race-high seven places from his grid slot.

Eighth went the way of Autostrada Motore Manila’s Angie King, while Ken Seto took his Rosso Scuderia Ferrari from 14th on the grid to ninth, holding off Charles Chan.

Martin Berry was 11th, but he has already sealed the Trofeo Pirelli 458 title.