A surprise David Gostner in the Coppa Shell.

Mugello - Excitement and suspense right to the last on the penultimate day of the Finali Mondiali. The Ukrainian Sergei Chukanov and the Italian David Gostner took the European crowns in the Trofeo Pirelli and Coppa Shell respectively. The wins came at the end of two very closely contested races, with drama even after the chequered flag.

The other European laurels still up for grabs went to Onofrio Triarsi (North American Trofeo Pirelli) and Eric Cheung (Asia Pacific Coppa Shell.) As for Max Blancardi (Coppa Intercontinentale Asia Pacific,) Pasin Lathouras (Trofeo Pirelli Asia Pacific) and Marc Muzzo (Coppa Shell North America,) they had already taken their championship titles and were therefore fully able to enjoy a race on such a beautiful track as the Mugello circuit, which drew a crowd of over five thousand.

In the first race of the day, the European Trofeo Pirelli, a duel between the leader Chukanov and Daniel Mancinelli provided the excitement for all 30 minutes of the race. In the first part, it looked as though Chukanov was heading for an easy win, as he was managing his lead over Mancinelli, who didn’t seem to pose a threat. The race was neutralised when Smeeth went off the track, which meant the two rivals closed up when there were just four minutes remaining. 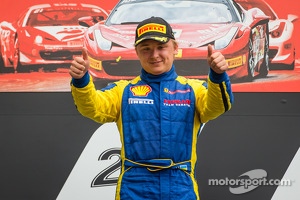 Chukanov was very cautious when the race restarted on the final lap, as he had everything to lose, while Mancinelli tried everything he could: the two collided and Chukanov ended the race in the gravel. Mancinelli crossed the line sixth, which was good enough to give him the title, but the Stewards gave him a retrospective drive-through penalty which dropped him to thirteenth place, thus handing back to Chukanov the title he richly deserved. The race win went to a very strong Philipp Baron, who masterfully dispensed with all his rivals in the early stages when the track was still damp, after morning rain.

Max Blancardi also played a strong part in the race, with a great climb up the order, which took him all the way to the second step on the podium, while third place went to Giacomo Stratta. Thailand’s Lathouras, fifth overall, took the win in the APAC Trofeo Pirelli, while Indonesia’s Tjiptobiantoro won the Coppa Shell in the same series.

Giosue Rizzuto was the star of the Coppa Shell Europe race, which also included the drivers from the North American series. Having started fifteenth, the driver from Palermo set off on an incredible come back which took him all the way to the front when there were just two laps to go. At the line, Rizzuto came home ahead of David Gostner, who right from the early stages seemed to be the most likely of the three pretenders to the crown.

His closest rivals, the Ukrainian Lebed and Germany’s Admaski, almost put themselves out of the running themselves: the former made a mistake on lap 3, going off the track; the latter repeated his lacklustre race of yesterday and was unable to do better than a modest twenty fifth overall, two laps down on his rival. Gostner thus took the European championship thanks to a well thought out race. Third overall, but first of the North American runners, was Onofrio Triarsi, twelfth past the chequered flag today.

Once again today, the on track show was not just a racing one. On this, the first of two days open to the public with free admission, the spectators were able to admire the Formula 1 cars run by the F1 Clienti Department and the laboratory cars from the XX programme. Also on show in the paddock, some amazing historic cars, first and foremost, a 250 GTO, as well as the entire current Prancing Horse range, with the LaFerrari obviously the star of the show.

Tomorrow, a crowd of around 15,000 fans are expected, having registered on the Ferrari website. They will be able to enjoy the excitement of the Challenge series Finali Mondiali and the Formula 1 car exhibition. They will also get the opportunity to salute a driver who has played a key role in the history of the Scuderia, namely Felipe Massa. The Brazilian will be taking part in his final appearance in Red in Italy, before bidding farewell at the end of this season to the team with which he has grown up. It’s one more reason, apart from being able to see the most beautiful cars in the world, for everyone to come to Mugello!

Finali Mondiali: Lebed and Mancinelli get the show going at Mugello