Basov, Triarsi, Ockey, Prette and Au are the new champions at Valencia. The “mondiali” titles are up for grabs next in two races scheduled for 9.30 and 11.50 tomorrow and reserved for drivers in the Coppa Shell and Trofeo Pirelli respectively. 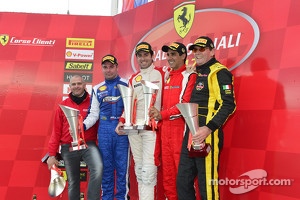 Cheste (Valencia), 1 December – The third day of the Finali Mondiali Ferrari began with the concluding races of the Ferrari Challenge Trofeo Pirelli. The competitors in the three different one-make series all took part in this final round, in which the 2012 champions were crowned.

After Alessandro Balzan sealed the title of European champion in the Trofeo Pirelli, today it was the turn of another driver from Ferrari Moscow, Alexey Basov, who sealed the continental Coppa Shell title by taking second place in Race 2. Of the leading drivers in the North American tour, the Trofeo Pirelli honours went to Onofrio Triarsi (Ferrari Central Florida), while the Coppa Shell prize was taken by Damon Ockey (Ferrari of Ontario). Philippe Prette won through in the Asia Pacific championship, racing for the Motor/Malucelli team in the Spanish round of the Trofeo Pirelli, while Alex Au became the 2012 champion in the contest for gentleman drivers. Starting this year the European division also boasts the introduction of two new title races: the Coppa Giovani reserved for drivers aged under 22 in the Trofeo Pirelli – in which Alexandr Skryabin (Ferrari Moscow) had already triumphed at the previous round at Vallelunga – and the Coppa Gentleman for Coppa Shell competitors over the age of 55, where the title went to the Ineco/MP Sauto-Prinoth duo.

The “mondiali” titles are up for grabs next in two races scheduled for 9.30 and 11.50 tomorrow and reserved for drivers in the Coppa Shell and Trofeo Pirelli respectively. 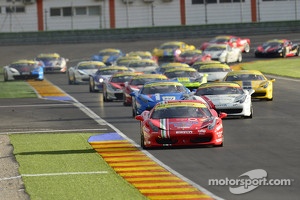 Among the entrants for the Trofeo Pirelli (Europa and North America and Asia Pacific) Race 2 victory went to Bjorn Grossmann (Ferrari Moscow), followed by his team-mate Balzan and Max Blancardi (Motor/Malucelli). Francisco Guedes (Motor/Piacenza) won the second race for the gentleman drivers of the European Coppa Shell ahead of Raffaele Giannoni (Motor/Piacenza) and Renato Di Amato (CDP). In the Coppa Shell race reserved for the Asia Pacific and North America series, Junhan Zhu (CTF China) came home in front of Eric Cheung (Motor/Piacenza) and Damon Ockey (Ferrari of Ontario).

Making the event even more extraordinary, there was a show by the Formula 1 cars that are no longer in competitive action and by the cars entered for the exclusive FXX and 599XX programmes. Tomorrow there will also be an exhibition of the Gran Turismo cars ahead of the traditional greeting by the Scuderia Ferrari Formula 1 team.

Finali Mondiali Ferrari ends with Alonso and Massa in attendance