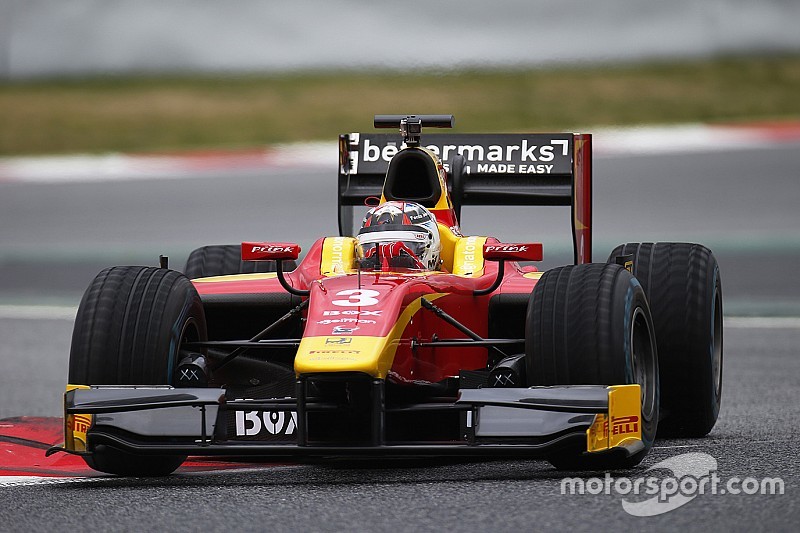 The first day of the pre-season test was held at the Circuit de Catalunya in Barcelona on Wednesday with the three hour morning session taking place under cloudy skies and cool temperatures. The first hour saw most of the teams running installation laps and getting the drivers comfortable in their cars before starting to run faster laps as the work began to develop the cars for the new season.

As the session entered its second hour the cars began to reduce their times but two red flag periods restricted running time. Into the final hour and the two Racing Engineering drivers, Jordan King and Norman Nato, were amongst the fastest runners and as the session came to a close Norman was an excellent 4th fastest on 1:29.542s with Jordan just behind his French teammate with a time of 1:29.686s to lie in 6th.

As the afternoon session got underway the drivers were greeted by rain and most of the teams opted to stay in the pit garages but after ninety minutes the track began to dry and the cars were soon in action again although wet tyres were necessary. Once again the Racing Engineering cars were running well with Norman 4th on 1:50.571s and Jordan 5th on 1:50.945s.

We were able to show a strong pace under any conditions, in the wet as well as in the dry.

A red flag interrupted the session briefly but times continued to fall and with an hour remaining Norman moved up to second with a lap of 1:48.840s. With just thirty minutes of the session left Jordan went 3rd as he reduced his time to 1:44.888s but the track was getting quicker and as the flag fell Jordan finished 6th with his earlier time and Norman was 18th on 1:48.174s.

It was sunny but cold for the morning session of Day 2 and both Racing Engineering drivers were immediately on the pace with Jordan going fastest after thirty minutes with a time of 1:30.398s and the young Englishman continued to lap quickly and as the session reached the half-way mark he had improved to 1:28.388s to lie 3rd with teammate Norman right behind him in 4th with a lap of 1:28.395s. In the final hour both men went quicker still and at the end of the three hours Jordan and Norman finished in 3rd and 4th with times of 1:28.093s and 1:28.106s respectively.

Jordan continued to show his pace in the afternoon setting the fastest time after two hours running as he set a lap of 1:28.779s and although he did not improve on this time it was good enough to see him finish in 2nd position at the end of the three hours. Norman spent the session working on the set-up of his car and did not try for any quick laps.

The final day of testing, Friday, saw the weather continue to be sunny and cold and once again the Racing Engineering team were showing their pace in the morning session as Norman went fastest after an hour with a lap of 1:28.170s which he then reduced a little to 1:28.126s. With half an hour remaining a further improvement to 1:27.630s saw! him finish the three hour session in 2nd place. Jordan was also lapping quickly finishing the morning half a second behind his teammate on 1:28.122s for 9th fastest time. In the afternoon session both Jordan and Norman used the time to carry out long runs and practice pit stops so no meaningful times were recorded.

During the three days of testing both of the Racing Engineering drivers showed excellent pace and that both Norman and Jordan will be amongst the favourites for the 2016 GP2 Series Championship. The GP2 teams will now prepare for the second, and final, pre-season testing which will take place at the Circuito de Jerez on the 29-30-31 March.

Alfonso de Orléans-Borbón, President of Racing Engineering: "I think the team did a great job during these last three days with everyone picking up from where they left off last season. Whenever we were not doing long runs we always had a driver in the top 4. This is promising for the upcoming test in Jerez where there is still quite a bit of work to do."

Norman Nato: "I am quite happy with the last three days. We were able to show a strong pace under any conditions, in the wet as well as in the dry. At the moment we tested a lot of things, so I am not yet using 100% of the car’s potential. We followed the plan we made at the workshop which is good as we were able to gather a lot of data. I am looking forward to Jerez to validate the insights we’ve gained."

Jordan King: "The weather threw a spanner in our work, but I feel that overall we managed to get through everything we planned for these three days. There is a lot to go through and take on board, but overall there has been some good progress made, so I am excited for Jerez and the season to start."

Podcast: Does Formula 1 have a restarts problem?