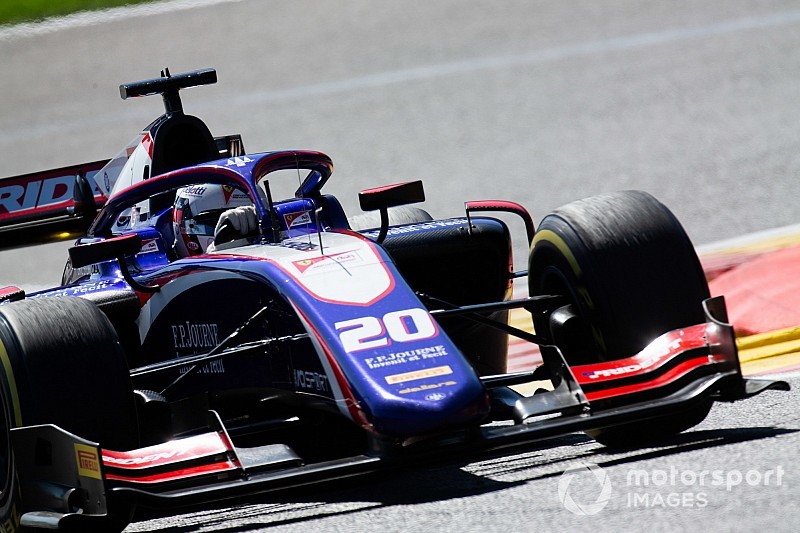 The Trident Formula 2 outfit will only field one entry at Monza as Giuliano Alesi's original car remains impounded following its involvement in the accident that claimed Anthoine Hubert's life.

Alesi lost control of his car at Eau Rouge early on in last Saturday's feature race at Spa, which forced Hubert to take avoiding action at Raidillon. His car was then hit at high speed by Sauber Junior Team driver Juan Manuel Correa.

Hubert died of his injuries, while Correa is being transferred to a specialist hospital in the United Kingdom in order to continue his recovery from surgery.

As Belgian authorities are still in possession of Alesi's car, the son of 1995 Canadian Grand Prix winner Jean will drive the team's other race car at Monza this weekend.

Trident's second driver Ralph Boschung - who has struggled for budget and had to give up his seat for two rounds earlier in the season - will step aside as a result.

The Arden team that Hubert raced for has already withdrawn its second car for the Monza weekend, while the Charouz-run Sauber Junior Team is also expected to field a single entry on the Italian Grand Prix support bill for Correa's teammate Callum Ilott.

A statement from Boschung's management read: "Due to last weekend’s tragic events in the FIA Formula 2 Championship at Spa-Francorchamps, Giuliano Alesi’s car has been impounded by the Belgian authorities, as it was involved in the serious accident.

"The result is that for the next race at Monza the Trident team will only have one car, which will be used by Alesi. This means that Ralph Boschung will not be able to compete at this weekend’s Italian F2 round.

"Ralph would like to extend his deepest condolences to Anthoine Hubert’s family, friends and the team, and also wishes Juan Manuel Correa the best in his recoveries."

Boschung said he is "looking to return to action" at the penultimate round at Sochi at the end of the month.

Euroformula Open points leader Marino Sato will continue at the Campos Racing team he made his F2 debut with last weekend at Monza, meaning he misses the clashing Silverstone Euroformula round.

The 20-year-old has taken 10 wins in the Formula 3-level category this season, and has a lead of more than 100 points with six races remaining.

Correa to continue recovery from F2 crash in UK