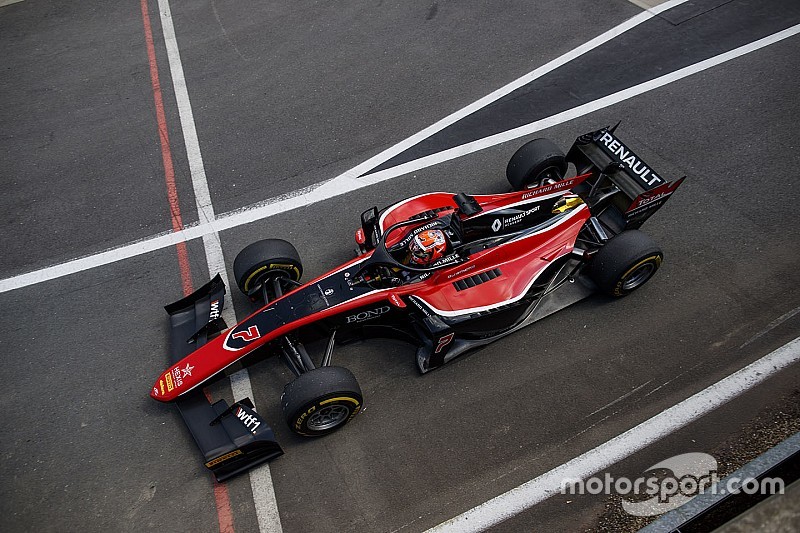 ART Grand Prix drivers George Russell and Jack Aitken believe a limiter fault was to blame for them breaking the pitlane speed limit in Formula 2 at Silverstone last weekend.

Both drivers were penalised by five seconds after their feature race stops on Saturday, speeding at the pitlane exit.

But having looked at the data on the cars, the drivers’ believe the limiter played a role, and Aitken lost the chance of scoring a point with the penalty.

“The F2 technical department are doing a huge job to improve the limiter of the car for the starts, the upshifts and the downshifts,” said Mercedes Formula 1 junior Russell.

“But it has a consequent effect on the pitlane speed limiter.

“It seems like after the pull-away [from the bit box] the speed goes over 60, before returning to the speed limit.

“Because we are in the last box in the pitlane, we keep accelerating as we exit the pitlane, and we don’t have the opportunity to return to normal [legal pit lane speed].

“We believe the other team’s speeds return to normal before the pit exit and it looks like that’s why they haven’t been penalised.”

Renault junior Aitken added: “We’re the last pitbox [before the exit of the pits], we got caught by the gun at pit exit.

“Whereas the other teams are overshooting [the 60kph limit], then they come back and stabilise [by the time they reach the gun] and that’s what’s done me and George.”

Motorsport.com understands other teams have noticed the same issue in re-visiting race data. Formula 2 refused to comment on the issue.

Russell’s race was relatively unaffected by the penalty, as during his stop a wheelgun broke, delaying his front-left wheel change and dropping him to second behind eventual winner Alexander Albon.

However, Aitken’s penalty, combined with another for a virtual safety car infringement, cost him eighth on the road, which would have given him the reverse-grid pole position for Sunday’s sprint race.

“The VSC was quite frustrating," explained Aitken.

"I was in a part of the lap where the reference lap time is very slow, it was actually green [within the delta time] when the VSC was ending but from those five seconds where I was sorting myself out I was much higher than the reference speed.

“I slammed on the brakes and was crawling trying to get it down, but I was still a second over when it went green.”