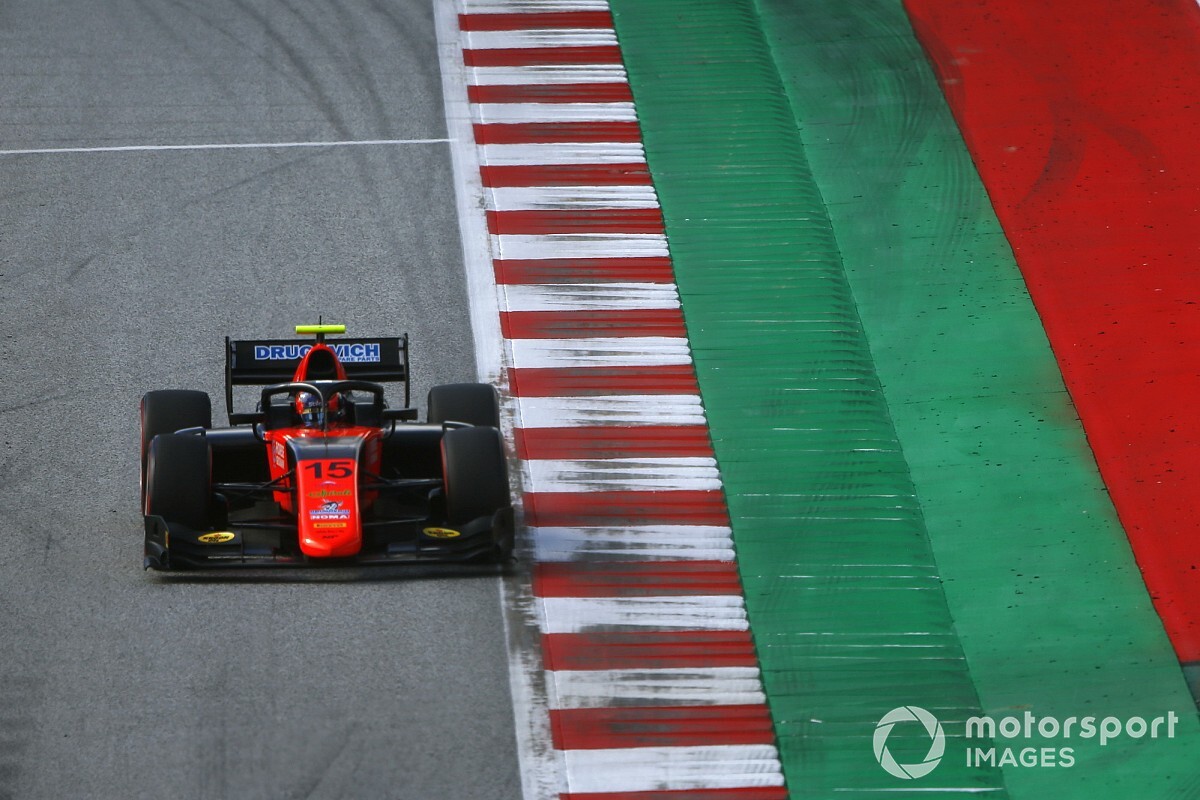 MP Motorsport's Drugovich made the most of his starting spot that he earned by finishing eighth during Saturday's opener, taking an early lead from Louis Deletraz.

From there, the Brazilian was never seriously threatened, surviving three safety car restarts en route to a straightforward win ahead of Charouz man Deletraz by 2.4 seconds.

Owing to the early cautions, the race boiled down to a 12-lap sprint, and Drugovich was able to get himself out of DRS range within three laps once the overtaking aid at last kicked in.

With the field all running the hardest Pirelli F2 compound, Drugovich was even able to set fastest lap with three tours remaining.

“It was really quite perfect,” said Drugovich, who scored points just once last year during a trying FIA Formula 3 campaign. “I’m so proud of the team – they fixed pretty much the car.”

In the early stages, Deletraz looked vulnerable to Ferrari protege Marcus Armstrong, who had started seventh but pulled off a sensational move into Turn 4 on the opening lap to snatch third from the battling Giuliano Alesi and Dan Ticktum.

Less than a minute later, the rear end of Alesi’s HWA car erupted in flames and he pulled off the circuit, prompting the first safety car. The field was about to go racing again when DAMS driver Sean Gelael, got stranded on a verge, causing the safety car to stay out one lap longer.

The race had just got going again when Luca Ghiotto (Hitech), was pitched into the gravel by Jehan Daruvala (Carlin) at Turn 4, with Guanyu Zhou (Virtuosi) – who looked set for victory on Saturday before a gearbox glitch struck – taking to the gravel in avoidance.

With Ghiotto’s car stranded, the safety car emerged again, but just a couple of laps after the restart Armstrong lost all power and unhelpfully parked on the track on the uphill approach to Turn 3, prompting yet another caution.

Most attention was on the battle for sixth between Nobuharu Matsushita and Mick Schumacher, who had passed Saturday winner Callum Ilott at the first restart.

Prema man Schumacher continuously tried the defence of Matsushita, even nudging him at the exit of Turn 3, but the MP man held firm to take sixth as Schumacher ran out of ideas.

A mistake late in the race from Ilott allowed Campos Racing’s Jack Aitken to grab eighth and the final point from the Virtuosi ace, while Nikita Mazepin (Hitech GP) took 10th.