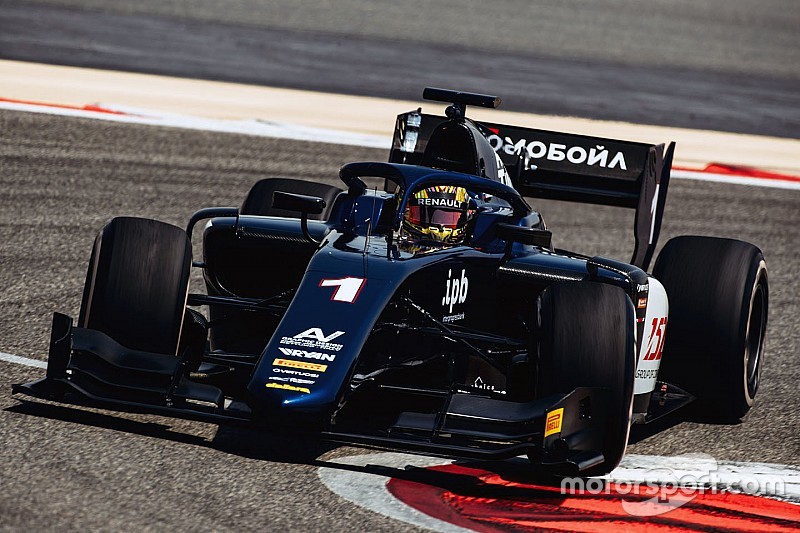 Renault F1 tester Artem Markelov rose from sixth on the grid to take victory in the Formula 2 Sprint race in Bahrain, as Nyck de Vries’ pitstop approach failed to pay off.

Markelov began from the outside of the third row but profited from stallers ahead to make early gains, before passing erstwhile polesitter Maximilian Gunther a few laps in to grab second.

Gunther had been alone on the front-row after Sean Gelael stalled on the formation lap but suffered a slow getaway and was overhauled by de Vries, whose own start from third was sluggish but sufficiently good enough to earn him the lead.

De Vries opened a three-second advantage over Markelov but opted to mirror the strategy used to perfection by Charles Leclerc 12 months ago and dived into the pits on lap nine of 23, switching from Primes to Options.

Markelov stayed out on Primes as de Vries emerged in 13th place, half a minute behind the new leader, and began his charge through the field.

De Vries lit up the timing screens as he carved through the midfield pack, in an attempt to re-create Leclerc’s 2017 effort, but ultimately reached only fifth.

With de Vries out of the picture, Markelov retained a two-second buffer over Gunther for much of the race to triumph, his seventh win across F2/GP2.

Gunther, on his first weekend in the category, came under pressure from Carlin’s Sergio Sette Camara during the closing stages, his plight accentuated by a heavy lock-up into Turn 1.

Gunther, though, was given breathing space when Sette Camara had to defend against Carlin teammate Lando Norris, who recovered from an early misfire, and their positions were unchanged through to the chequered flag.

Norris' fourth was enough to ensure he departs the opening round atop the standings, nine points clear of Markelov.

De Vries was fifth, as the leading driver who opted to pit, ahead of Luca Ghiotto, while Ralph Boschung and Nirei Fukuzumi took the final points for seventh and eighth.

Both ART drivers Jack Aitken and George Russell stalled on the grid – leading to some lightning avoidance reactions from rivals – and they came home a lowly 18th and 19th, the Mercedes junior lapped after making a late stop.