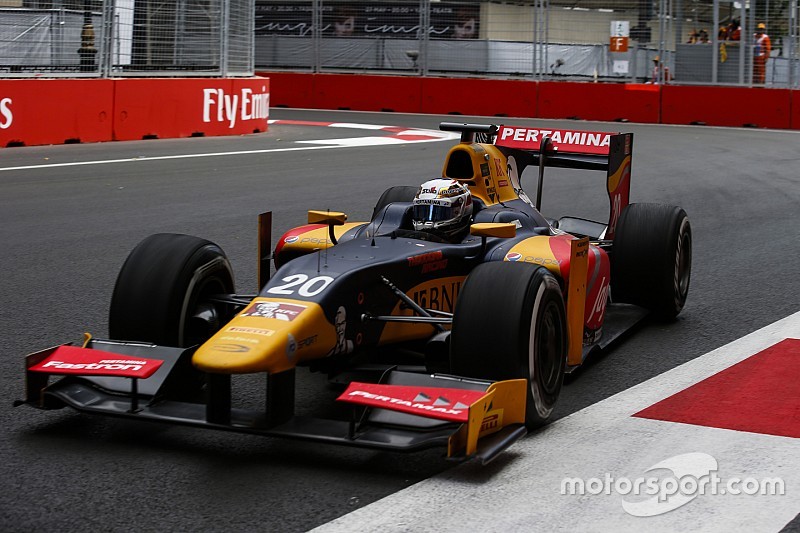 Prema Racing's Antonio Giovinazzi took an against-the-odds maiden GP2 win in a crash-filled Baku race, where less than half the field made the chequered flag.

Giovinazzi bogged down massively off the line and looked extremely unlikely to challenge for a win, but a combination of sheer pace, slipstream overtakes and mass crashes around him allowed the Italian to come through.

With Nobuharu Matsushita taking the lead at the start, the first few cars negotiated Turn 1 without drama, but it was an entirely different story for a number of championship frontrunners further down the order.

As Giovinazzi's slow start bunched up the pack, Pierre Gasly looked to pass Norman Nato down the inside - but with all parties running out of room, a collision followed.

Nato escaped despite losing a lot of ground, while Gasly's car was mounted by Carlin's Sergio Canamasas, taking both out of the race.

The other Carlin of Marvin Kirchhofer was sent straight into Williams development driver Alex Lynn, both retiring on the spot - as did Lynn's DAMS teammate Nicholas Latifi.

When the safety car was lifted a few laps later, Russian Time's Raffaele Marciello slipstreamed past Matsushita on the restart, only for the Japanese driver to fight back and retake the spot a lap later.

Matsushita would hold the lead for the next stint, before Trident's Philo Paz Armand brought on the second safety car of the race, going off at Turn 1.

Most drivers made use of that opportunity to make their mandatory stop, although a select few would stay out.

As the green flags returned, it was Marciello's turn to lead, the Italian picking off Matsushita into Turn 3 before yet another crash occurred.

Pic, who had stayed out, squeezed Monaco race winner Artem Markelov in the wall, the collision terminally damaging both of their cars - and bringing out the third safety car.

Marciello checked out on the next restart, while Matsushita fell prey to Nabil Jeffri, the Malaysian remaining, at that point, as the only driver in the race yet to make his mandatory stop.

In passing Matsushita, Jeffri also allowed Oliver Rowland to sneak past both, with Giovinazzi also taking advantage to overtake the Japanese driver.

This allowed Marciello to break the tow and build a gap, the Italian helped further by his compatriot Giovinazzi muscling past Rowland - only for the poleman to start quickly making up ground on the race leader.

As the race passed halfway point in the scheduled distance, Giovinazzi was back to the lead, slipstreaming past Marciello on the main straight and immediately establishing a two-second gap, which then vanished immediately as Nato tried to overtake teammate King and was rewarded with broken suspension.

A lengthy clean-up followed, with time enough only for two more laps as the race resumed.

Giovinazzi, flooring the gas pedal as late as possible on the main straight, just managed to hang on to the lead at the restart, despite locking up into Turn 1.

The Italian then escaped through the slower corners and claimed his and his Prema team's first win in GP2, as Sergey Sirotkin fought through to slipstream past Marciello for second at the line.

Rowland held off Evans and Matsushita for fourth, with Sean Gelael claiming his first points in the series in seventh and Daniel de Jong bagging the reverse-grid pole for Sunday in eighth.

Luca Ghiotto and Gustav Malja made up the top 10 and were also the last drivers left standing.