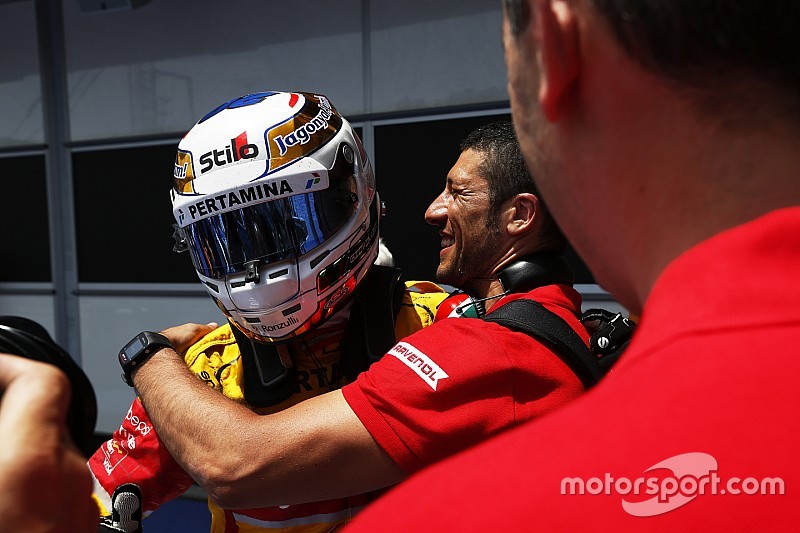 Prema Racing's Antonio Giovinazzi completed a shock sweep of the GP2 weekend in Baku, winning the sprint race that was shaken up massively by safety car restarts.

Saturday race winner Giovinazzi was dead last after lap one, running some seven seconds off the driver ahead - but the chaos in the field allowed him to return to the front, and he completed the sweep with a pass on teammate Pierre Gasly on the final lap.

Having picked up reverse-grid pole with an eighth-place finish on Saturday, Daniel de Jong had a sluggish getaway off the line on Sunday - but since fellow front row starter Sean Gelael was even slower, it was again Nobuharu Matsushita taking the lead again into Turn 1.

The Honda protege then quickly established a gap of a second out front, with de Jong holding off Mitch Evans for second, before the Campos driver started dropping off.

And, as the status quo was maintained between the leading duo in the opening stint, Evans soon fell prey to Oliver Rowland, who overshot a passing attempt into Turn 1 before getting the job done with DRS into Turn 3 - with Sergey Sirotkin following through past the Kiwi a lap later.

Seven laps into the race, deja vu struck for Matsushita, who saw his lead evaporate due to the appearance of the safety car - just as it had in the early laps of the Saturday race.

The reason for the stoppage was Jordan King, the Manor development driver spinning Jimmy Eriksson into the barrier at Turn 1 while fighting for P9.

Shortly thereafter, Eriksson's car was removed and the green flags returned, bringing chaos into what had earlier been a seemingly normal race.

Matsushita, controlling the restart, was on the throttle early and ended up passing the safety car before it had even entered the pits.

As such, MP drivers de Jong and Rowland both got a good tow, the latter moving into the lead - but the teammates then locked up on cue into Turn 1, Rowland going wide and handing first place back to Matsushita and de Jong having to reverse in the run-off.

And when Rowland was then passed by Sirotkin for P2, the safety car returned, for a Philo Paz Armand off in Turn 7.

The next restart was even worse, as Matsushita appeared to floor the throttle early on the straight before easing off, catching out a number of drivers behind him.

As a result, Rapax's Gustav Malja was caught out by Evans braking ahead of him and slammed into the Kiwi, breaking his front wing.

In Turn 1, that broken front wing meant the Swede could not brake - and he went straight into Rowland in the corner, spinning the Brit around and forcing Gelael into the wall.

Naturally, the safety car was back out immediately, Matsushita having to control yet another restart. The Japanese driver was late on the throttle this time around - only to be crashed out by Raffaele Marciello, who had missed his braking at Turn 1.

This gave the lead to Gasly and promoted teammate Giovinazzi to second place, the duo now running a second apart.

The Italian made quick work of the Frenchman's advantage and, even though his DRS would not work, he managed to force Gasly into a mistake into Turn 1 on the final lap.

Gasly, running wide while defending, had to settle for runner-up, while Sirotkin completed the podium.

It was fourth place for King, ahead of Artem Markelov, Sergio Canamasas, Nabil Jeffri and Arthur Pic.