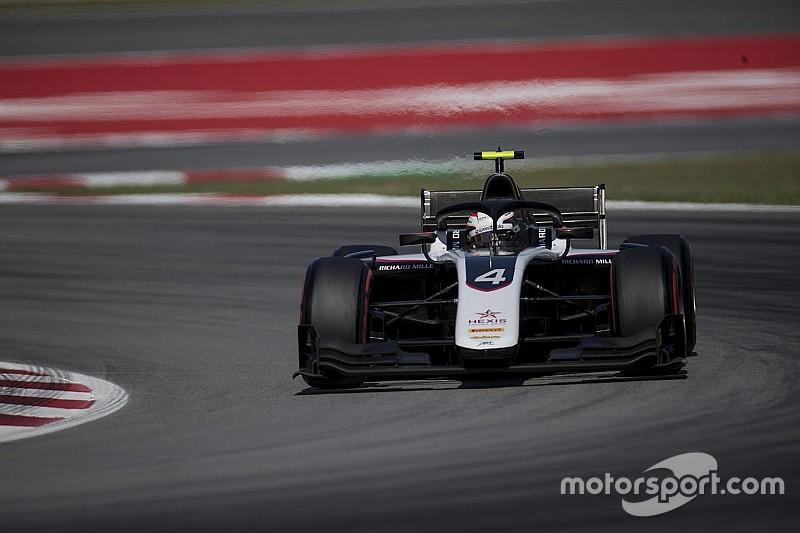 Anthoine Hubert vaulted into the lead from third on the grid, as both front-row starters Callum Ilott and Jordan King bogged down, with de Vries making his way from fourth to second.

A safety car was deployed shortly after the first lap was completed, as Carlin driver Nobuharu Matsushita had to park up at the exit of Turn 10 as his car caught fire.

Hubert was able to repel an assault from de Vries on the restart, but once DRS became available the reigning GP3 champion was powerless to hold off his rival, de Vries sweeping past into Turn 1 at the start of lap eight of 26.

From there, de Vries - who is no longer associated with the McLaren F1 team - built a three-second advantage, which he successfully managed to win for the first time since joining ART.

After dropping to third off the line, Sauber Junior Team driver Ilott was able to recover one place at Hubert's expense, passing at the same point de Vries took the lead on lap 11.

Six laps later, Luca Ghiotto passed a fading Hubert in similar fashion, and the UNI-Virtuosi man set about challenging Ilott for second in the closing stages.

The pair began the final lap half a second apart, and Ghiotto was able to pull off a bold outside move at Turn 1 to grab second off Ilott, who nonetheless scored his first F2 podium.

King (MP Motorsport) was seventh after a feisty battle in which he appeared to force Campos man Jack Aitken off the road at Turn 1.

Mick Schumacher was eighth on the road for Prema, but a five-second penalty for cutting Turn 2 while trying to pass Aitken on the final lap dropped him down to 12th, with Aitken taking the final points-paying position as a result.

Matsushita was the sole retirement of the race.