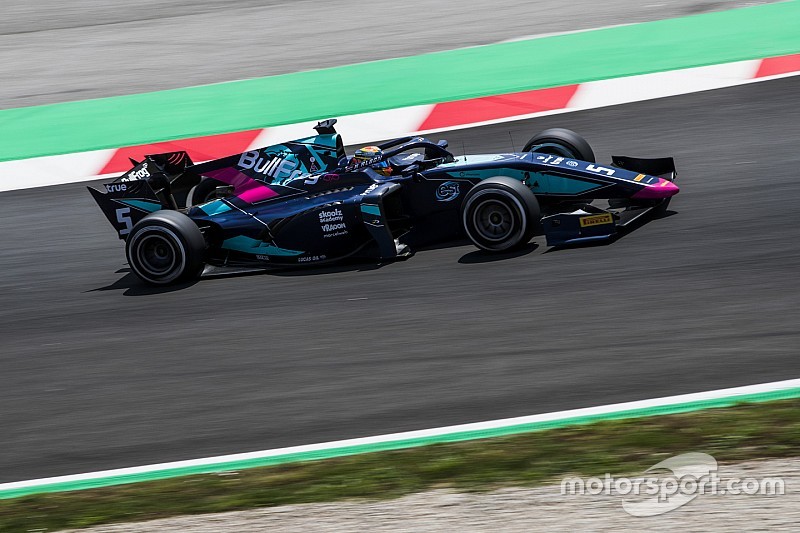 Alexander Albon took his second consecutive Formula 2 pole position in Barcelona qualifying, which was red-flagged after a crash from Santino Ferrucci.

Albon's DAMS teammate Nicholas Latifi was the early pace-setter in the session as many top drivers couldn't set a quick time on their first tries.

While George Russell went wide at Turn 1, Sergio Sette Camara's Carlin was left crawling around the track due to a throttle cable issue, and the Brazilian pitted without a representative time.

Sette Camara's problem also compromised the laptimes of others such as his teammate Lando Norris and Albon, but the former jumped up to second next time around anyway.

Nyck de Vries and Albon subsequently lowered the benchmark, the latter taking the lead with a 1m28.500s.

As the majority of the field entered the pits, Ferrucci brought out the red flag as he crashed at Turn 11.

It was the second incident of the day for the Haas junior, as he had also gone off in practice.

When the session was restarted with 17 minutes to go, only DAMS duo Albon and Latifi went out initially as the rest of the field waited for the final stages of qualifying.

Both DAMS drivers improved, with Albon setting a time of 1m28.142s and Latifi moving up to second place.

Albon appeared to be able to go even quicker, as he set a fastest first sector, only to run into traffic and subsequently go into the pits instead.

However, nobody was able to disturb Albon's benchmark time as second-placed De Vries ended up more than two tenths off the pace.

Only those four drivers were able to edge Latifi out as the Canadian settled for sixth, just ahead of Russian Time's Tadasuke Makino.

With mechanics working on his car throughout the entire session, Sette Camara managed to rejoin the track just in time and take 14th with a last-minute effort.

Artem Markelov had a disappointing qualifying, taking 19th and only beating Ferrucci.