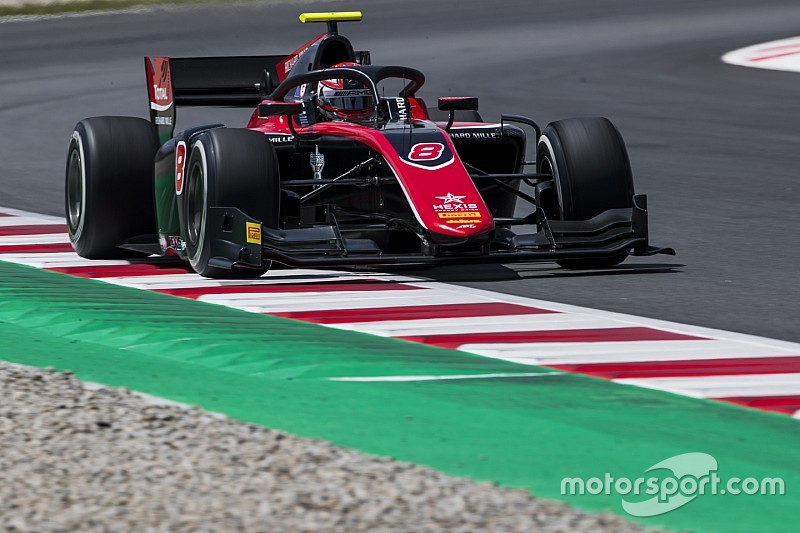 Light rain fell on track before the start and, while the field was able to begin on slicks, conditions were damp throughout the race.

While pole-sitter Alexander Albon only dropped to fourth, Nicholas Latifi completely stalled from sixth and was pulled into the pits.

Just two corners into the race, the VSC was deployed due to Maximilian Gunther spinning at Turn 2 and getting stuck in the gravel.

Nyck de Vries led Russell, Luca Ghiotto and Albon at that point. Russell, however, was able to slipstream past de Vries two laps after the restart, and moments later, VSC was back as MP duo Roberto Merhi and Ralph Boschung made contact coming into Turn 1.

Once the race was back to green, de Vries also fell behind Albon, who had already found his way past Ghiotto before the second VSC stint.

The race was once again neutralised two laps later when Arjun Maini crashed at Turn 5.

Russell and Albon were separated by 1.3s at the restart and that gap remained largely stable until Albon started to rapidly lose pace as their stints on the medium tyres drew to a close.

Albon had already been passed by both de Vries and Ghiotto before he went into the pits with the latter pair, as well as Russell from the lead, following suit one lap later.

Artem Markelov and Nirei Fukuzumi, yet to pit at that point, inherited the first two positions with Russell and de Vries rejoining third and fourth.

However Ghiotto and Albon were only sixth and eighth with Lando Norris and Jack Aitken, leaders on the alternate strategy, emerging fifth and seventh.

Norris and Aitken, starting on softs, were running fifth and sixth early in the race and both pitted after the VSC, which was caused by Maini.

Aitken jumped ahead of Norris by pitting a lap earlier, but Norris managed to overtake the Renault junior with an audacious move up the inside at Turn 10.

Soon after all frontrunners pitted, the virtual safety car was out for the fourth time due to contact between Sean Gelael and Louis Deletraz at Turn 1.

Markelov and Fukuzumi pitted instantly after the restart with Russell, now back in the lead, under attack from De Vries. The Dutchman tried to pass him into Turn 4 but ran too wide and Russell managed to reclaim the position.

De Vries had no more attempts until the end of the race and Russell crossed the finish line first. Norris completed the podium, holding off Ghiotto, who took fourth.

Despite running off-track and nearly hitting the wall on the opening lap, Fukuzumi was only 5.6s off a point-scoring finish in 11th.