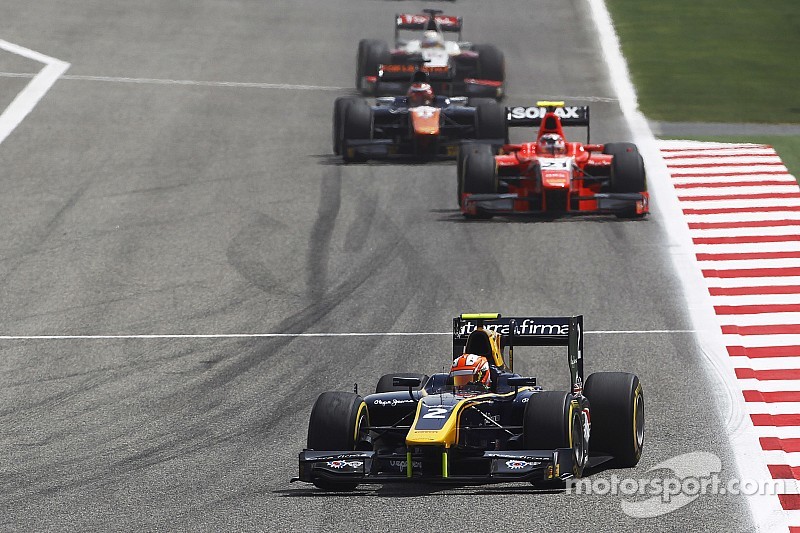 Alex Lynn scored a first victory in only his fourth start in the GP2 Series at Barcelona on Sunday morning, working hard to repel everything that Saturday’s winner Stoffel Vandoorne could throw at him.

From reversed-grid pole position, Norman Nato led the field into Turn 1, with Lynn leaping up to second ahead of Raffaelle Marciello. Front-row starter Pierre Gasly fell to fifth, behind Vandoorne who jumped from eighth to fourth.

The first-ever GP2 virtual safety car was required when Andre Negrao and Rene Binder clashed on the approach to Turn 4.

The virtual safety car’s conclusion caught out Marciello, who spun out of third as he got on the power as the race restarted while in the middle of Turn 7.

The DRS system, which malfunctioned yesterday, was up and running again for this race, and Nato was told “we need more gap” as Lynn stuck to his tail.

Lynn, aided by the DRS, grabbed the lead at Turn 1 on lap 8. Vandoorne then cruised up to Nato and DRS-ed past on the following tour, and Gasly soon demoted him to fourth.

Vandoorne got within DRS range of Lynn straight away, but as he couldn’t get past him immediately he opted to drop his pace to save his tyres.

As Nato tumbled backwards, his defensive tactics meant Rio Haryanto passed Alexander Rossi briefly for fifth at Turn 4, only for Rossi to nab it back at the following corner.

Rossi grabbed fourth on lap 10, while Haryanto and Nato almost clashed at Turn 1 on lap 11, with Markelov (who had passed Arthur Pic on lap five) and Pic also passing Nato.

Vandoorne pushed again with 10 laps to go, cruising back into DRS range at will, but Lynn responded by raising his pace too, so Vandoorne went back into saving mode.

Vandoorne admitted defeat with two laps to go, saying “the tyres are gone”, so Lynn was able to complete an accomplished victory.

Gasly finished third ahead of Rossi. Markelov passed Haryanto for fifth at Turn 1 with three laps remaining, with Pic and Nato rounding out the top eight.

Yesterday’s runner-up Mitch Evans failed to start when his engine of his Russian Time car cut-out on the installation lap to the grid. His absence caused Pic to mistakenly pull into his grid slot, which caused Nobuharu Matsushita to stall on the initial grid, which caused an aborted start.