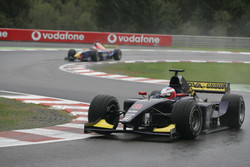 Adam Carroll.
Photo by GP2 Series Media Service.
The podium was completed by Spaniard Borga Garc?a and yesterday's second-place finisher Ernesto Viso, who took third today. The BCN driver took the final podium step despite being hit in Eau Rouge just before the red flag. He kept his position as the race stewards based the race results on the last time that the cars passed the finish line on green flag, as the rules state.

The Irishman felt comfortable in the rain at Spa. "It was very good -- the car was just really, really good, and I could do whatever I wanted with it. I had the grip, I was able to push and to just really go, and we could make a really big gap, which was really good", Carroll commented.

The competition started with the safety car due to the heavy rain, with Carroll in the lead, followed by Alexandre Negrao, who quickly dropped down when the green flag came out on lap two.

Eau Rouge was the most critical place of the day and the winner explains the conditions in one of the most dangerous turns this the season: "When it rained it started to get really heavy. There was some standing water at the top of Eau Rouge -- I came through that and it was a little bit squirrelly -- it was no big deal or anything, but you could feel that the standing water was getting much heavier. That was the only thing that was a problem".

The Super Nova driver also had the fastest lap of the race and added his third series victory to the ones he took in San Marino and Monaco.

The race was filled with different incidents, although the one that involved Jani and Yoshimoto became the most spectacular of the weekend.

The Japanese driver gave his view of the incident that was the product of the intense rain in Spa. "On that lap it started to rain very hard, and (Gianmaria) Bruni made a little mistake through Eau Rouge and he was slow. As I was coming up I went across, and he came over -- he didn't mean to do it, I'm sure, but he couldn't see anything because of the spray from (Fairuz) Fauzy -- because of this he went to the left, and that where I was. 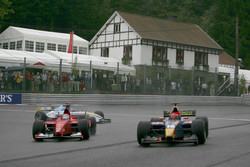 Neel Jani and Hiroki Yoshimoto.
Photo by GP2 Series Media Service.
"I got pushed over by Bruni, and I went over the white line or the grass or whatever and just instantly lost it and hit the barrier in a big impact, and then came back over and Jani hit me. Poor Jani -- there was nowhere to go", explained Yoshimoto.

Jani was behind Bruni and Yoshimoto and took the worst part of the impact. "On the data I hit him at 210 km/h -- I don't know how many g's. but I had two impacts -- one on Yoshimoto and one on the rail, and on the rail I almost flipped", reflected Jani on the incident.

"The problem was I couldn't see -- my eyes were gone somehow. I couldn't see, and it was like I was drunk -- okay, I'm not so often drunk! I couldn't stand very well because my back was hurting too much," continued the Swiss driver. "They took me to the hospital because of my back, and they just checked the spine and then said I had probably just taken some big hit on my spine, and that's why it was hurting so much."

None of the drivers suffered major injures despite the strength of the accident's impacts.

The results were taken from the end of lap nine -- the penultimate lap -- before the lap during which the signal to suspend the race was given, as stated in the sporting regulations. However, as the race had not met 75% distance, only half points were awarded.

In the championship hunt, Nico Rosberg finished fifth, with one more point for his tally, while his rival Heikki Kovalainen recovered to take ninth after starting from 15th position.

The German now leads with 102 points to 99 over the Finn. Both drivers will now go to a head-to-head battle at the season finale at the Bahrain International Circuit, near Sakhir, on September 29th and 30th.

ART Grand Prix has 155 points in the first GP2 Series championship between the teams. With Arden staying at 117, 29 points behind, and a maximum of 35 points available for a "perfect" team weekend at Bahrain, ART has the team title clinched.

Frederic Vasseur: "ART GP are champions and I congratulate all the members on the team for this brilliant result, but we must not forget that there is still more to do so that Nico becomes the first ever GP2 series champion."

Watching from the pitwall at Monza, Felipe Drugovich was crowned FIA Formula 2 champion. But how did the MP Motorsport driver go from overlooked underdog to dominating the series in 2022?