As Motorsport.com launches the latest episode in its Race of My Life podcast series, we revisit the race former Hispania Racing and Team Lotus Formula 1 driver Karun Chandhok picked as his best - the 2008 Silverstone GP2 feature race.

We'd been at Magny-Cours before that race and my iSport teammate Bruno Senna was on a good run of qualifying results. I was getting a little bit on the back foot and annoyed at my own qualifying. I either had traffic or made mistakes, it was a bit of a tough time.

Silverstone was a circuit I always loved and went well at. I know it so well because I worked there as an instructor, lived in Brackley, raced in British Formula 3 - it was effectively my adopted home circuit.

I was really pumped up for it and in qualifying I was on a really good lap. I came through Bridge flat and as I turned left into Priory, Andy Soucek was trundling along at the apex so I had to abort the lap. I was on course to be about fourth so I was furious.

I came into the pits, got out and started running down the pitlane with my helmet on and started giving Andy a mouthful. To his credit, he immediately apologised, which disarmed me! I didn't know what else to do but just walk back quietly.

More in Race of My Life series:

The next day it was baking hot, with a track temperature of mid to high-30s. My race engineer Richard Selwin said, 'How about we try a softer rear spring?', because it felt like it was going to be a race where we'd be tyre limited.

With the Bridgestones back then, tyre deg wasn't a conversation that you had as much as we do in the Pirelli era. It was part of a bigger set-up conversation, but that day we looked at the ambient temperature and thought it could be an issue.

We went for the softer rear spring and Bruno didn't want to do it - he was happy where he was at. That was one of the key decisions that helped me out.

I started 10th and made a couple of places off the start, but I had really good pace. I passed Soucek around the outside of Stowe, which was quite nice, and picked my way up. With that generation of car you could still follow in the high-speed corners - the front wing was relatively simple and we had the tunnels to produce good downforce.

After the stops I passed Grosjean down the inside into Stowe. But as I came out there was a yellow flag and I had to brake and let him past again. Then I got by at Brooklands, diving down the inside over the kerb and we banged wheels. It needed a bit of co-operation!

I was probably three or four laps away from catching di Grassi, who ran into tyre trouble. Every time I came down Hangar Straight I could see him getting closer to me but I needed more laps because my tyres were still in pretty good shape.

It was relief to be third after a tough weekend at Magny-Cours and a rubbish day on Friday. I had worked with the team to set the car up in the way I wanted it and had enough conviction that it was the right direction. It was also the fact we came from behind. I went from 10th to third because I overtook people - good drivers - on track, not because they fell off.

The car was mega that day, so good to drive. The second lap of the race I did a 1m33.1s and the last lap was a 1m33.5s - you don't get that type of race anymore where you can push like hell all the way through in F2.

It was a helluva race, which showed off the best of GP2. 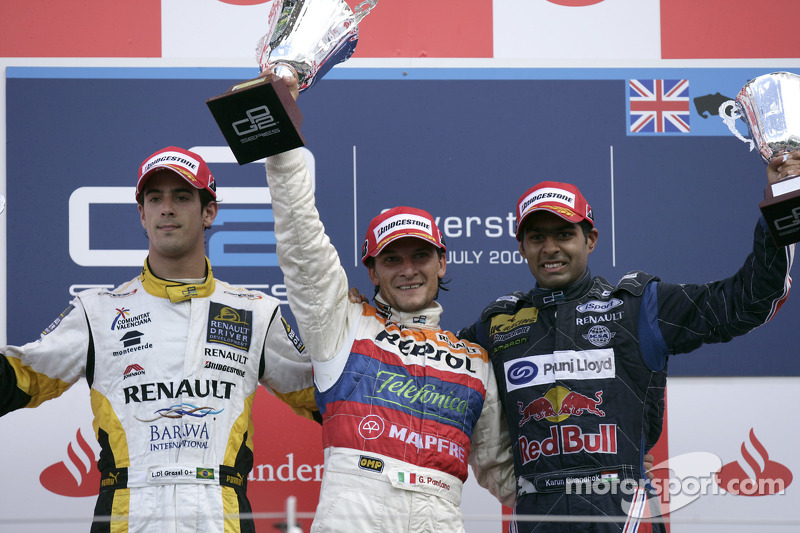