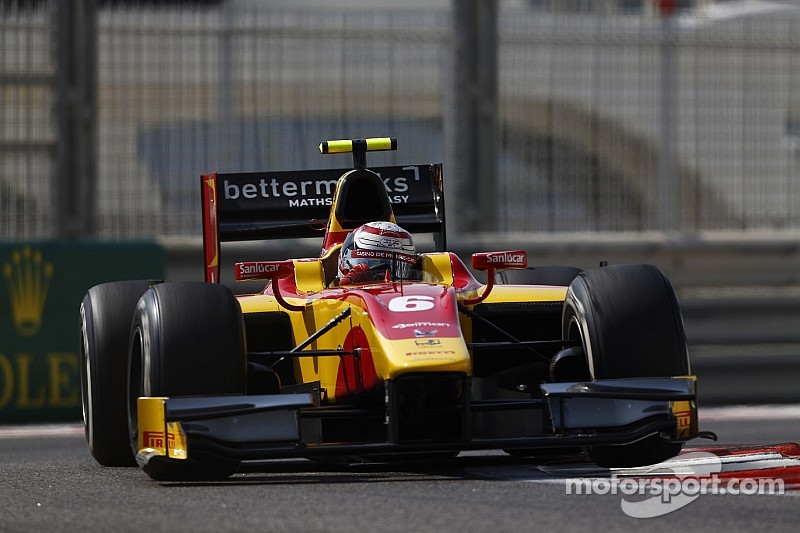 Stefano Coletti stormed off the front row to lead from lights to flag for a dominant win in the final race of the 2014 season, easily holding off newly signed Sauber driver Felipe Nasr and top rookie Arthur Pic, while behind them McLaren reserve driver Stoffel Vandoorne did enough to deny Nasr the vice champion position.

As the lights went out Coletti and poleman Pic struggled to get off the line, with the Frenchman cutting left to defend from Stéphane Richelmi and Coletti forced to go well wide to get around the pair into turn one, leaving a gap on the inside to be claimed by Nasr for P3, which went one better after mugging Pic at the end of the straight as the Monegasque driver flew off into the distance.

GP2 Series champion Jolyon Palmer noted ahead of the race that he just wanted to enjoy his car one last time, and said the only thing that could spoil his day would be if he was taken out early: unfortunately for the Briton that’s precisely what happened when he was spun into retirement going into the marina section, handing Vandoorne one more position as he chased down his rival.

The battle for the vice-championship

As Coletti left everyone behind, all eyes were on the points difference between Nasr and Vandoorne in 7th: as things stood they were on the same points and wins, and with the Brazilian unable to close on the leader it was up to the Belgian to make a difference. With overtaking at the circuit being notoriously tough and Mitch Evans in P6 not looking likely to concede anything, Vandoorne pulled out the fastest lap of the race and hoped for the best.

On lap 10 Coletti looked to have spoilt his plans by running faster, but the Belgian bided his time (and tyres) before taking the fastest lap back on lap 16, along with the valuable point that goes with it. However, 4th placed Johnny Cecotto was losing his tyres at about the same time, dropping him back into the clutches of Richelmi and Evans, who blasted past as they ran three wide down to the marina section.

And as the flag dropped Coletti was 3.7 seconds to the good over Nasr, with Pic just over a second behind. Richelmi was next across the line in 4th, just ahead of Evans and Vandoorne, who snuck past Cecotto at the end of the main straight with just over a lap to go, and Raffaele Marciello claimed the final point of the 2014 season in P8.

The final points total in the Drivers’ Championship saw Palmer crowned with 276 points, ahead of Vandoorne on 227 and Nasr on 224, while DAMS topped the Teams’ Championship with 357 points to 292 for Carlin and 253 for ART Grand Prix.