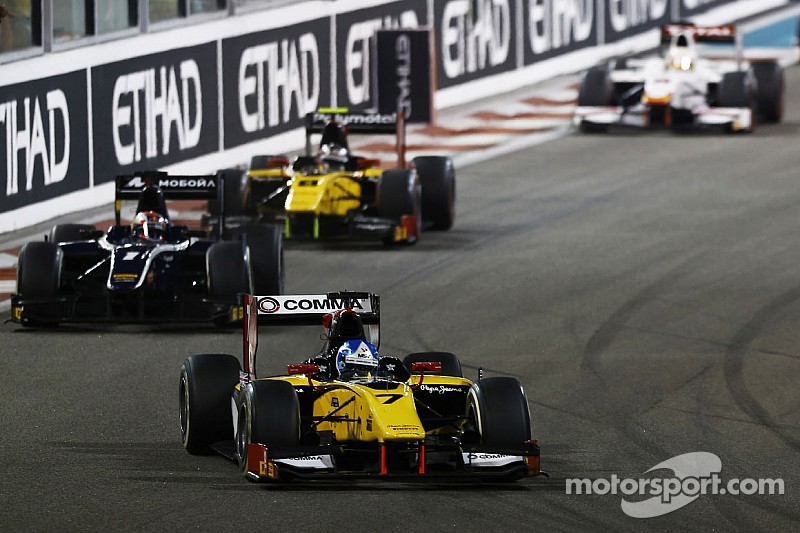 The men from the Sarthe became the kings of the road in the kingdom of Abu Dhabi.

For the first time French team DAMS has pulled off a never-before-achieved feat! In the same year it has won the drivers' and teams' titles in GP2 and the Formula Renault 3.5 Series! On Saturday Jolyon Palmer's second and Stéphane Richelmi's fifth places clinched this grand slam, and the men from the Sarthe became the kings of the road in the kingdom of Abu Dhabi.

This result capped a season in which speed and consistency were the team's hallmarks with five victories, nine top-3 finishes, four pole positions and nine front row spots in the 11 rounds of the 2014 GP2 Championship.

In the exotic décor of the Yas Marina circuit the DAMS squad shattered the dreams of their main rivals, the Carlin squad. Stéphane's and Jolyon's second and fourth places in free practice fired a warning shot across their rivals' bows due to their searing pace. They drove this home in qualifying in which the newly-crowned GP2 champion from England and his team-mate from Monaco clinched second and third places on the grid.

The stewards' decision on Sunday spoiled the party a little, but the important thing was that the team won the title it deserved.

Only an exceptional upset could have prevented the French outfit from wrapping up the championship title - and it didn't happen! The main race on Saturday went off without a hitch. Pole sitter Stoffel Vandoorne was on a different tyre strategy to Palmer and he pulled away from the field while managing his tyre degradation with considerable skill.

Although the DAMS lead driver wanted to end the season with a victory, he settled for second place which was more than enough to fill his team's cup to overflowing, all the more so as Richelmi's fifth place added a big haul of points to their tally. So the fact that the following day the champion's race ended on lap 1 after a collision with Mitch Evans was not a major setback. The only fly in the ointment that spoiled the joy of winning the title was the penalty inflicted on Richelmi on Sunday that deprived him of a well-deserved fourth place.

Thus, the 2014 season ended in a blaze of glory for DAMS after a no-holds-barred battle against some top-level competition. There's a saying in French that goes something like this: 'show me who you've beaten and I'll tell you how good a champion you are!' Thus, the team would like to congratulate its rivals, in particular Carlin and ART for providing such tough opposition, which adds even more lustre to the titles won this year. Rendezvous in 2015. In the dusk in Abu Dhabi we all remember a driver who's missed by everybody: #JB17 - Keep fighting Jules!

Jean-Paul Driot, DAMS' Owner: "In my twenty-six years at the head of DAMS I've known many joys but this season will always have a special flavour for me. I'd like to offer my heartiest congratulations to the whole squad which conquered the drivers' and teams' titles in both promotional categories, GP2 and FR 3.5. clinching all the victories in Monaco in both series where we had never won before. This GP2 season has been a fantastic one for us and we never relaxed, not even for a moment.

In particular, I'd like to congratulate our champion, Jolyon, whose concentration and determination never wavered and proved crucial in wrapping up the teams' title. I'd like to include Stéphane in these congratulations who showed a great turn of speed, and made a big contribution to our success. A huge thanks to everybody."

Jolyon Palmer: "My final day leaves me with a feeling of disappointment even though we finished the job on Saturday. I'm delighted to have helped to bring the teams' title to DAMS with whom I had an incredible season. From start to finish they gave me a car which enabled me to fight for victory or a top-three finish. I'll always have great memories of our collaboration."

Stéphane Richelmi: "The stewards' decision on Sunday spoiled the party a little, but the important thing was that the team won the title it deserved. I'd like to thank them for these two exceptional years during which I learned a lot, and I'm both happy and proud to have contributed to their success this season. In addition, DAMS helped me score my first victory - what's more on my home turf in Monaco - and that will always remain engraved in my memory!" "