Red Bull Formula 1 junior Jehan Daruvala says his gap to Carlin Formula 2 teammate Yuki Tsunoda was exacerbated by a faulty engine that needed to be replaced two-thirds into the 2020 season.

After finishing third in the FIA Formula 3 championship in 2019, Daruvala stepped up to F2 this year with Carlin where he was paired with fellow Red Bull protege Tsunoda.

But while Tsunoda was almost immediately up to pace and nearly scored a victory in only his third race in the series, Daruvala struggled to finish regularly inside the points for much of the season, only managing a best finish of fourth in the opening eight rounds.

It wasn’t until the Spa weekend that it became evident that the Mecachrome engine on Daruvala’s car was down on power, after the Indian driver qualified over half a second down on polesitter Tsunoda in ninth position.

Convinced by the case put forward by Daruvala and Carlin, the F2 organisers fitted a new engine in his car in time for the Monza sprint race, and the 22-year-old’s season was transformed from the following round in Monza.

Having scored just 23 points in the first eight rounds of the season, Daruvala added another 49 to his tally in the final four weekends of the year, culminating in a victory in the Bahrain sprint race after a long battle with DAMS driver Dan Ticktum.

Speaking a week after his F2 victory - the first for an Indian driver since Karun Chandhok’s pair of successes in what was then known as the GP2 Series in 2008-09 - Daruvala admitted that it was frustrating for him to see Tsunoda winning races and being tipped for an AlphaTauri F1 drive when he was hamstrung by an underpowered engine.

“Mainly it became apparent in Spa,” Daruvala told Motorsport.com when asked to elaborate on his engine issues. “After qualifying compared to my teammate I was losing at least half a second on the straights and it became the same in Monza where I was in the slipstream of the car in front and I was still losing four to five tenths on the straight.

“Finally my engine did get changed in the second race for Monza and from Mugello onwards I had another engine in my car. It was a lot better after that.

“It was frustrating at that time. At Spa and Monza my qualifying laps were both good enough for pole if you look at the data in the corners, but I qualified like ninth or eighth or something.

“I did a really good lap compared with my teammate who was on the front row in both weekends while I was ninth and eighth. Just with the same engine as his I would have been on the front row. Just things like that made me frustrated.

“But people on the inside can see what’s happening and they know what’s going on. From that side I had a calm mind about it.”

Daruvala also struggled with race starts in the first half of the season, often losing several positions on the opening lap after qualifying reasonably well.

This was particularly evident in the Hungaroring sprint race when he slipped from third to eighth in the first two corners and could only recover to seventh by the end of the race.

Asked to explain why he was so slow off the line in the early part of the campaign, Daruvala said: “I just struggled with the procedure at the start of the season.

“It’s not easy to get the cars off the line and in general, [but] I struggled a lot more than other people did. Qualifying in top six or eight and I was getting bad starts and moving straight [towards the back]. Losing three or four positions means the race is always going to be difficult from then on.

Daruvala eventually finished 12th in the drivers’ standings this season and is expected to remain in F2 for another year, having taken part in the post-season test last week with his 2020 team Carlin.

Tsunoda, meanwhile, will replace Daniil Kvyat at AlphaTauri next year, becoming the first Japanese driver to race in F1 since Kamui Kobayashi in 2014.

Former Red Bull junior Ticktum took Tsunoda’s place at Carlin for the duration of the rookie test and is in prime position to switch to the British team in 2021. 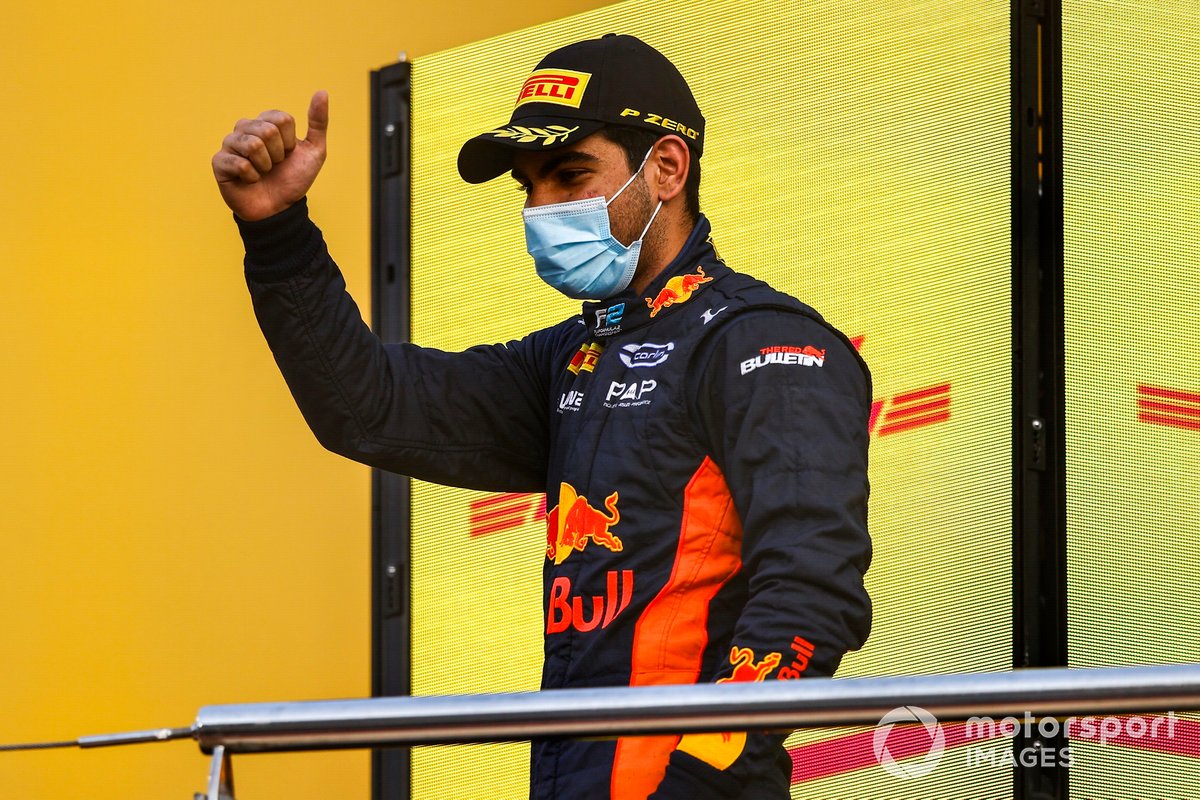 Tsunoda will push Gasly within a few races, predicts Carlin