Scuderia Coloni chose Davide Rigon to complete their line-up for the 2011 GP2 Main Series season, flanking the already confirmed Michael Herck. The agreement between the Italian team and the driver from Vicenza was a natural conclusion after a very positive experience in pre-season testing, with the newly formed pair shining in the recent Barcelona outing: on the spanish track Davide clinched the sixth fastest time overall (and the 2nd quickest in the final session) despite having just a few kilometres under his belt on the new Dallara car equipped with Pirelli rubber.

I think that we can be satisfied with the line-up that we will field like never before.

This was possible thanks to both a great job by the team and Rigon's great talent and versatility, qualities that led him to two Superleague Formula titles (2008 and 2010) and to being selected by Scuderia Ferrari for a very important task, the simualtor development in Maranello. Now the team, boosted also by the best overall laptime posted by Herck in the Barcelona test, is ready to tackle the season that is going to start in less than two weeks time in Istanbul.

Paolo Coloni: “I think that we can be satisfied with the line-up that we will field like never before. Davide, despite his late arrival in the team, managed to get on with the guys in the best possible way thanks to a very good attitude, and his talent proved to be an immediate boost for our outfit. Besides this, I'm really happy to be working again with a driver who has been selected by Scuderia Ferrari: this takes us back to 1989 when Roberto Moreno, who was on testing duties with Maranello, made his debut in F1 with our team. We have great expectations also with Michael, as he was really good in GP2 Asia and he's still improving, showing that he can be steadily among the top challengers. So we believe that we have two very strong drivers, that have the talent and the experience to manage even the most tricky moments in a race. We hope that this, together with the positive mood of the team, will lead us to great results”. 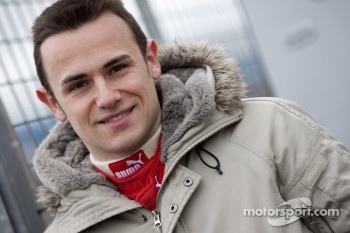 Davide Rigon: “I'm really delighted to be back in GP2, and doing it with Scuderia Coloni, a team that has been racing in the Series from the very first year, is a further boost to my ambitions. They clinched great results in the past and they have a lot of experience, something that proved to be very useful in Silverstone, where they managed to make my first contact with the car very easy. I’m happy to feel that I have the trust of both Enzo and Paolo Coloni, and I’m sure that together we will clinch great results".

Giovanni Minardi (Minardi Management): “I'm really happy that all our efforts had such a good outcome. Davide is in a crucial moment of his career, both his shape and experience are at the top and he really has what it takes to win. That’s why this agreement with Scuderia Coloni is very important for him, giving him the chance to focus only on his driving duties. We have very high ambitions, and we want to impress some team managers”.