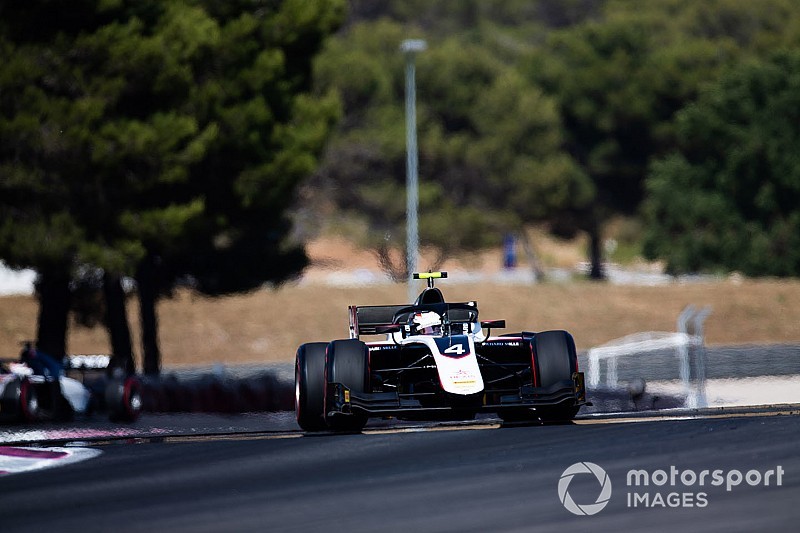 One-quarter of the 20-car field was eliminated in a chaotic start to the race, the chaos beginning with Sean Gelael wiping out his Prema teammate Mick Schumacher at Turn 3.

The Indonesian driver lost control of his car on the inside of the turn and hit Schumacher who, after his car went airborne, only continued to then retire in the pits.

Ralph Boschung and Nikita Mazepin collided later on in the lap and, after the virtual safety car was deployed, Dorian Boccolacci's Campos stopped on track from seventh place, which led to the race being red-flagged.

De Vries restarted from the lead, the Dutchman jumping up from fourth on the grid to lead at Turn 1 from fellow second-row starter Jack Aitken.

Most top drivers started on the softer of the two available compounds and pitted in the third or fourth lap after the restart.

Aitken stopped a lap earlier than De Vries and was in front after the Dutchman had pitted, but De Vries made a crucial counter-attack on the same lap at Turn 8 to retake the lead.

De Vries built a small lead, which was nearly doubled during a brief VSC stint, caused by an overambitious move from Callum Ilott on Nobuharu Matsushita that ended with the Ferrari junior spinning out.

Aitken then responded to de Vries' increased lead, setting a couple of fastest laps and closing the gap down to 2.5s as the final stages of the race began.

But the gap again grew as another VSC neutralised the race, and Aitken soon switched his attention to the charging Sergio Sette Camara.

Seemingly unaffected by losing radio communication with his DAMS team, the Brazilian was able to steal second at Turn 1 with two laps remaining.

De Vries thus took the win ahead of Sette Camara and Aitken, with Guan Yu Zhou continuing his solid rookie season with a fourth.

Nicholas Latifi brought the second DAMS into the top five ahead of Jordan King, the last driver to pit in the race.

The Briton was also the top driver on the alternate strategy as Luca Ghiotto, who was fighting for fifth after his late stop, crashed when he was passed by Juan Manuel Correa at Turn 6.

Correa himself fended off Nobuharu Matsushita for seventh with the Japanese driver ending up losing out to Anthoine Hubert and settling for ninth.

Giuliano Alesi went from a pitlane start for hitting Louis Deletraz in qualifying to 10th.

Alesi penalised for hitting Deletraz on qualifying out lap

Schumacher: No malice by Gelael in airborne crash